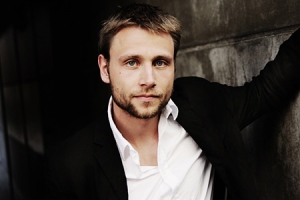 Max Riemelt, born January 7, 1984, in Berlin, played theatre at school and made his professional acting debut in 1997 in the TV movie "Eine Familie zum Küssen". In 1999, the autodidact Riemelt starred in his first film "Der Bär ist los" ("Bear On The Run"), directed by Dana Vavrova, and became known to a wider public as a futile admirer of one of the girls in "Mädchen, Mädchen" ("Girls on Top", 2001), directed by Dennis Gansel.

After several minor roles in TV series such as "Wolffs Revier" or "Alarm für Cobra 11", Riemelt made his breakthrough performance in Gansel's "Napola – Elite für den Führer" ("Napola", 2004) and won the actor's award at the 2004 Karlovy Vary film festival for his portrayal of the son of a working class family who enters an elite Nazi school. In 2005, Riemelt won the German Shooting Star award and further consolidated this image with leading roles in Dominik Graf's youth drama "Der rote Kakadu" ("The Red Cockatoo", 2005) - for which he won Bayerischer Filmpreis 2006 -, in Dennis Gansel's highly praised adaptation of the novel "Die Welle" ("The Wave", 2008), and in Hardi Sturm's ambitious romantic comedy "Up! Up! To the Sky" (2008). In the successful comedy "13 Semester" ("13 Semesters", 2009) by Frieder Wittich he plays a slightly overstrained freshman student.

After TV-roles as in "Der Untergang der Pamir" (2006) and "An die Grenze" (2007) Riemelt plays the leading role of a Berlin police officer in Dominik Graf's celebrated crime series "Im Angesicht des Verbrechens" ("In the Face of Crime", 2010), followed by another role as detective in the vampire drama "Wir sind die Nacht" ("We Are the Night", 2010), again directed by Dennis Gansel.

In 2011, he had starring roles in the drama "Tage die bleiben" and the horror thriller "Urban Explorer". In 2012, he re-teamed with director Dennis Gansel to play opposite Moritz Bleibtreu in the political thriller "Die vierte Macht".

The same year, he starred in two highly different films: In the tragicomedy "Heiter bis wolkig", Riemelt plays a ruthless womaniser who eventually changes his life after befriending a terminally ill woman; in "Der deutsche Freund" ("My German Friend"), which is set in 1950s Argentina, he portrays the son of German immigrants, who falls in love with a Jewish girl and one day learns that his father is actually a wanted Nazi criminal.

After a key role as a mysterious fisherman in the thriller "Du hast es versprochen" ("Forgotten") Riemelt played another unusual lead role: In the award-winning drama "Freier Fall" ("Free Fall") he gives an impressive performance as a gay policeman who falls in love with a married colleague. He also received rave reviews for the TV drama "Blutgeld" that was inspired by true events: Set in the 1980s Riemelt played a haemophile infected with HIV by contaminated blood preservation.

In the period drama "Elly Beinhorn – Alleinflug" (2014, TV) he embodied Bernd Rosenmeyer, a race driver and husband of the legendary pilot Elly Beinhorn. Riemelt could then be seen in an impressive part alongside Hannelore Elsner as a young man who is frustrated with life and develops a special friendship with an older cabaret singer in "Auf das Leben"("To Life!", 2014).

The competition of the Filmfestival Max Ophüls Preis 2015 then featured two Max Riemelt films: the multiple award-winning drama "Freistatt" ("Sanctuary", theatrical release: June 2015) in which he delivered a stunning performance as a clergyman in a home for difficult children led by a sadistic warden, and "Lichtgestalten" ("Icons Of Light", theatrical release: January 2016) featuring Riemelt as a young man who wants to start life all over again with his girlfriend and therefore destroys all traces of their past existence.

From 2015 to 2018, Riemelt was also part of the cast of the American mystery series "Sense8" based on ideas of Lana and Andy Wachowski: He played one of eight people from around the world who are connected to each other in mysterious ways.

In 2017, he could be seen in a leading role in the Australian big screen production "Berlin Syndrome" (directed by Cate Shortland), as a psychopathic young teacher who keeps an Australian backpacker imprisoned in his apartment. The film received largely positive reviews and several film award nominations.

In Mark Monheim's television comedy "Die Freundin meiner Mutter" (2019) he played the son of a lesbian mother (Katja Flint), who asks him to act as a sperm donor for her new life partner (Antje Traue). Riemelt had other leading roles on TV as an investigator in Josef Rusnak's crime thriller "Der Schneegänger" (2020) and as an alleged murderer and family man in the "Tatort" episode "Die Zeit ist gekommen" (2020).

In the summer of 2020, "Kopfplatzen" ("Head Burst") was theatrically released.The drama is about a paedophile who is in danger of losing control of his inclinations when a new neighbour moves in with a young son. Riemelt received excellent reviews for his portrayal. In the same year Riemelt was also seen in a supporting role in a children's film "Die Pfefferkörner und der Schatz der Tiefsee".