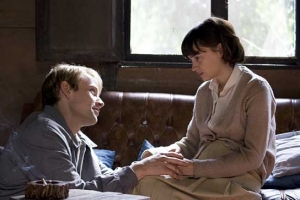 Sulamit, the daughter of German-Jewish emigrants from Germany, grows up in Buenos Aires in the fifties. Between her and Friedrich, the German boy living next door whose parents escaped to Argentina after the war, a deep intimacy and kinship develops. When Friedrich realizes that his father was an SS Lieutenant Colonel in Nazi Germany, he breaks off all contact with his family and goes to Germany to study. Sulamit follows him a few years later.

Friedrich takes an active part in the German protest movement of May 1968 and is dedicated to the Cuban cause and the liberation struggles of Latin America. Gradually his whole life centers on his political commitment. His desperate efforts to repair the damage that's been done leave no room for a love relationship in his traumatized universe. He finally leaves Germany to join an Argentinian guerilla movement. His very first military action leads to his arrest and he ends up in jail. Sulamit remains in Germany, gets her master's degree and initially works as a translator. She starts a relationship with Michael, a man who loves her and supports her with her career. But to her he is more of a father figure and not the great love of her life. Sulamit visits Friedrich in a remote jail in Argentina, but he suppresses his feelings and she returns to Germany. When the dictatorship in Argentina finally falls, Friedrich is set free. He remains in Patagonia, living near an indigenous Mapuche settlement. Sulamit, now 43, once again travels to Argentina to meet Friedrich. This time their encounter is about to take a different turn.

A film about love and politics, about overcoming origins and the heritage of parents.