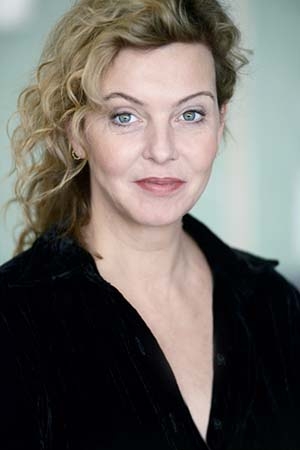 Margarita Broich, born in Neuwied on May 3, 1960, studied photo design in Dortmund from 1977 to 1980 and then worked as a theater photographer at the Bochum Schauspielhaus. In 1983, she began studying acting at the Hochschule der Künste in Berlin and, after graduating in 1987, received an engagement at the Frankfurt Schauspielhaus. Over the years, she has appeared on stage at numerous renowned theaters, including the Deutsches Theater, the Schillertheater, the Maxim Gorki Theater and the Volksbühne in Berlin alone; she has worked with directors such as Heiner Müller, George Tabori and Christoph Schlingensief. From 1991 to 2002, Broich was a member of the Berliner Ensemble.

Broich made her debut as a film actress back in 1991 with a central role in Rudolf Thome's "Liebe auf den ersten Blick" ("Love at First Sight"). However, in addition to her stage acting, she has only been appearing regularly in front of the camera for television and cinema productions since the early 2000s. She had a bigger supporting role in Matti Geschonneck's war crimes drama "Jenseits der Liebe" ("Beyond Love", 2001, TV); in Christian Moris Müller's feature film "Vier Fenster" ("Four Windows", 2006) she played the mother of a broken family, and in Hermine Huntgeburth's TV two-parter "Teufelsbraten" ("The Hidden World", 2008) she played the strict mother of the rebellious title character. She also had a striking role as the mother of a traumatized Afghanistan veteran in the award-winning drama "Nacht vor Augen" ("Night Before Eyes", 2008).  In the same year, she can also be seen as an accused concentration camp guard in the German-American co-production "The Reader" with Kate Winslet and David Kross.

In addition to numerous other TV supporting roles, including in Hermine Huntgeburth's "Neue Vahr Süd" (2010), and guest appearances in crime series such as "Der Bulle von Tölz," "Tatort" and "SOKO Wismar," Broich was also seen in larger and smaller roles on the big screen, including as an unintentionally childless yuppie wife in Matthias Glasner's "This is Love" (2009), as the headstrong grandmother of the young title character in the children's film "Hier kommt Lola!" (2010) and as a film producer in the social and media satire "Das traurige Leben der Gloria S." (2011). Broich received much critical praise for her portrayal of a controlling mother and grandmother in Oskar Roehler's family saga "Quellen des Lebens" ("Sources of Life", 2012). This role also earned her a nomination for the German Film Award in the Best Supporting Actress category in spring 2013. Also in spring 2013, it was announced that Broich would succeed Nina Kunzendorf as detective inspector in the Frankfurt episodes of the popular "Tatort" series.

In addition to acting, Margarita Broich continued her work as a photographer. In 2011, for example, she had an exhibition at the Martin-Gropius-Bau in Berlin, where her backstage portraits of theater colleagues were on display.

Broich played other feature film roles as a teacher in "Fack Ju Göthe" ("Suck Me Shakespeer", 2013) and as a clinic doctor "Vaterfreuden" ("Joy of Fatherhood", 2014). She was part of the ensemble of the tragicomedy "Über-Ich und Du" ("Superegos", DE/AT/CH 2014) and the children's film "Quatsch und die Nasenbärbande" ("Fiddlesticks", 2014). In the melancholic comedy "Hedi Schneider steckt fest" ("Hedi Schneider is Stuck", 2015) she was the mother of the title character, in the tragic youth film "Rockabilly Requiem" (2016) the conservative mother of an up-and-coming rock musician. Hans Steinbichler cast her in "Das Tagebuch der Anne Frank" ("The Diary of Anne Frank", 2016) as Auguste van Pels (pseudonym: Petronella van Daan), whose family shared a hiding place with the Franks. She played a chamber singer in "Zwei Herren im Anzug" ("Two Men in Suits", 2018) and a strict teacher in the children's film "Unheimlich perfekte Freunde" ("Double Trouble and the Magical Mirror", 2019).

For her roles in the "Tatort" episode "Wendehammer" and the television drama "Aufbruch," she was awarded Best Actress at the 2016 Hessian Film Awards. From 2018 to 2022, she had the title role in the television drama series "Meine Mutter...". She had leading feature film roles in Petra Seeger's autobiographical docudrama "Vatersland" (DE/BE 2020) and in Leander Haußmann's "Stasikomödie" (2022) as the underestimated wife of a Stasi informer.