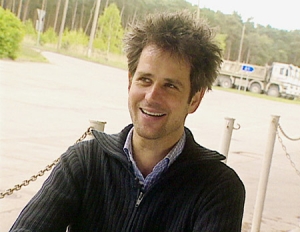 Christoph Schlingensief, born October 24, 1960, in Oberhausen, made his first short films already at a young age. In 1972, he founded "Jugendfilmteam Oberhausen". After finishing school, he applied for Munich's Hochschule für Fernsehen und Film but was rejected twice. Instead, he temporarily studied German philology, philosophy, and art history at Munich's university from 1981 on. He also attempted to become an author and a musician. Back in Oberhausen, Schlingensief participated in several films by director Werner Nekes – together with Helge Schneider, an old acquaintance from the neighbouring city of Mülheim.

Together with Nekes, Schlingensief lectured at Hochschule für Gestaltung in Offenbach from 1983 to 1985, and, from 1986 on, at the Düsseldorf art academy. Schlingensief made his first feature film, "Tunguska – Die Kisten sind da", in 1983. In 1985/86, he finished "Menu Total" and "Egomania – Insel ohne Hoffnung" that starred Udo Kier and Tilda Swinton, two iconic actors of underground cinema. In the meantime, Schlingensief also worked as a unit manager for the TV series "Lindenstrasse" (1987). Between 1988 and 1992, Schlingensief finished his most famous and most controversial films "100 Jahre Adolf Hitler" ("100 Years of Adolph Hitler"), "Das deutsche Kettensägenmassaker" ("Blackest Heart"), and "Terror 2000", his so-called "Deutschlandtrilogie".

In 1993, Schlingensief made his debut at Berlin's Vokksbühne with the play "100 Jahre CDU – Spiel ohne Grenzen" ("100 Years of CDU"). After several other productions, he became an in-house director of Volksbühne in 1996 and shifted the main focus of his work to theatre productions and live events. Still, Schlingensief made two more films in the following years, "Die Spalte" (1995) and "Die 120 Tage von Bottrop" (1997). In his projects, Schlingensief repeatedly worked with outsiders and the rejected of society, dealt relentlessly with the topic of fascism, and often responded immediately to political events. At Documenta X in Kassel 1997, he was arrested during the event "Mein Fett, mein Filz, mein Hase – 48 Stunden Überleben für Deutschland" ("My Felt, My Fat, My Hare, 48 Hours Survival for Germany") for holding up a sign that said "Tötet Helmut Kohl" ("Kill Helmut Kohl").

In the election year of 1998, Schlingensief founded a political party called "Chance 2000" that participated in the electoral campaign for German Bundestag. From 1998 on, Schlingensief also appeared on TV with several of his own formats. He started with "Talk 2000" which was followed by "U 3000" for MTV and "Freakstars 3000" for the music TV channel VIVA, a casting show for disabled persons that aimed at the "American Idol" TV show format.

During the following years, Schlingensief was mainly doing art performances (for instance, at the 2005 Reykjavik Arts Festival), opera projects (for instance, at Deutsche Oper Berlin in 2008), and theatre productions, at Vienna's Burgtheater (2006), at Berlin’s Volksbühne (2006), and at Gorki Studio Berlin (2008).

At the beginning of 2008, Schlingensief was diagnosed with lung cancer.

In January 2009, "Christoph Schlingensief – Die Piloten", a documentary film about a fictional talk show that Schlingensief produced in 2007, opened in movie theatres. In the same year, Schlingensief was member of the international jury of the Berlinale.