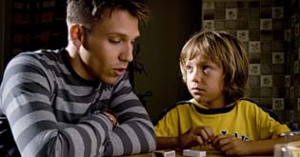 Night Before Eyes / A Hero′s Welcome

25-year-old German soldier David Kleinschmidt is warmly welcomed by his family and friends when he returns earlier than expected to his hometown in the Black Forest from a tour of duty in Afghanistan. His shy eight-year-old step-brother Benni is full of admiration for him. But David has changed. He is withdrawn, cold and no longer the person he was before serving in action. He is unexpectedly decorated by the Bundeswehr for an alleged act of heroism: he is supposed to have killed an attacking terrorist in selfdefence. This "heroic deed" torments David. In his nightmares he is haunted by a young Afghan boy. He closes himself off even more from the outside world. The only person David is concerned with is little Benni, who is teased by his schoolmates because he seems weak and poor at sports. So David trains him in hand-to-hand combat and football. Under the pretext of playfighting, he encourages the boy to use more and more violence, which threatens to escalate. In his despair, David sees the only solution in revealing the truth about his act of heroism. But now his life really begins to get out of control …

On her feature film about the consequences of war duty, first-time director Brigitte Bertele notes: "′Nacht vor Augen′ invites the spectator to look into the mirror and ask himself to what degree David′s potential for violence and destructiveness can be found in each and every one of us."