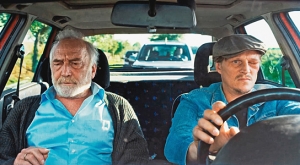 Nick Gutlicht, a small-time crook from a working class background who makes a living in the illegal trade of valuable books is in debt and has to go underground. He happens to wind up at the elegant town house of well-known but now elderly psychologist Curt Ledig, who, in spite of his dementia and a pathological aversion to kitchens, is unwilling to move in with his daughter. Thus Nick is hired by the family to look after the old man. Curt can now work on the lecture nobody expects him to be able to give at an impending symposium, and Nick gets a first-rate hide-out. The partnership of convenience between these two individualists soon develops its own momentum. Curt sees in Nick a fascinating new research subject and makes him undergo an absurd therapy. Nick senses in Curt’s phenomenal library a unique opportunity to consolidate his finances. Mayhem of unforeseen proportions ensues.

After his psychological thriller "Der Räuber", which screened in the Berlinale Competition in 2010, Benjamin Heisenberg now serves up an idiosyncratic buddy movie which wittily balances slapstick and irony with deeper meanings of grotesque import.