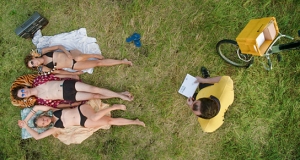 How do we want to live together? Ten people in the middle of nowhere in Brandenburg attempt to answer this question, living amidst greenery, techno and theater. In the artist colony Rocket Perelman they live out their version of freedom and independence – each to their own and all for the collective. Jen is new to the Rocket. In her mid-20s, she’s gotten out of the city, out of the rat-race and is delving into a new life. But the Rocket needs money and the solution lies – where else? – in art or, more specifically, a play. Jen finds herself taking up the lead role in a play that gradually overtakes reality and tests the idealism of the entire community to its limits.