Not a Love Song 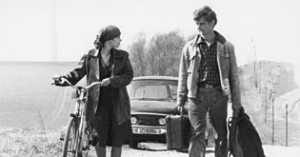 Not A Love Song

An almost deserted village on the Polish border, where the future is so dismal that "even the animals have begun to commit suicide", according to Bruno (Lars Rudolph), the hapless hero of the story.

Nevertheless, one die-hard local couple, Karl (Matthias Freihof) und Luise (Anna Thalbach), are banking on a rosy future, with plans to build a spa-center. Bruno, a would-be James Dean, becomes the object of both Luise′s and Karl′s desire, but he can neither be saved by Karl concepts of free enterprise nor seduced by Luise′s charm. The three characters find themselves caught in the Beckettesque atmosphere of the village where nothing functions: neither the economy, nor love, nor the getaway car. All that remains is the nostalgic memory of desire, but not desire itself.