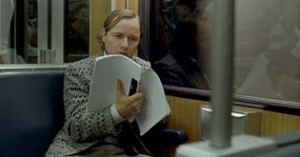 Frank dreams of becoming a successful author, while his male life partner Akim wants to raise a foster child with him. Then fate enters, when Frank meets charismatic Kathrin, who becomes a sort of muse for him. He follows her around, eventually shares the bed with her and – after being thrown out by Akim – also the apartment. Being pregnant, she earns the money while he writes and does the housekeeping. In his novel, he idolizes her as a fearless heroine in a sexist work environment. But Kathrin has a secret agenda of her own, in which Frank plays a major part.