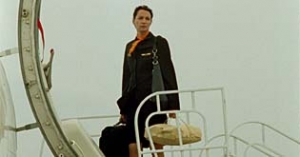 Ellen must face some new turns in life. Although her job as a flight attendant keeps her rotating around the globe, she finds her private life has become a placebo, lending the sensation of security she needs so badly.
She even suffers a panic attack whilst on duty, causing her to disembark and abandon an airplane that is preparing to start. As she crosses the airfield, she knows instinctively that she is leaving her old life behind.

Driven by a sense of alienation, Ellen seeks a place to belong and in doing so, becomes a tourist in the lives of the people and groups she encounters. Ellen becomes acquainted with a group of young activists. Amongst them is Karl. The two are instantly drawn to one another and following his trail. They set out on a crusade to destroy the industry of animal torture and liberate as many of its victims as they can. Yet however unbalanced this situation has become, Ellen finds she’s growing stronger.

Inwardly matured and convinced that there must be a specific place in the world where she is needed, Ellen is ready to venture a new beginning …