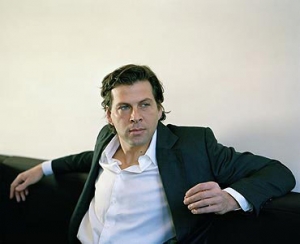 Hans Jochen Wagner, born 1968, completed an apprenticeship at the Ernst-Busch-Schauspielschule in Berlin and a film acting course at the Filmakademie Baden Württemberg. From 1997 to 1999 he appeared on stage at Vienna's Burgtheater, immediately followed by two years at the Deutsches Theater Berlin, where he appeared in productions of "King Lear" and "Der kaukasische Kreidekreis".

He made his screen debut in 1998 in Christian Wagner's short film "Zita - Geschichten über sieben Todsünden". Since then Hans-Jochen Wagner has been playing in television and cinema productions, including impressive roles in the social drama "Jena Paradies" and Stefan Krohmer's satire "Sie haben Knut" ("They've Got Knut"). In both films, the 6'17'' tall Wagner can be seen in his trademark role as a likeable, down-to-earth and good-natured buddy - a part he also played in Ulrich Köhler's "Montag kommen die Fenster" ("Windows on Monday", 2006).

After Wagner had been a freelance actor at the Maxim-Gorki-Theater in Berlin from 2001 on, he was appointed to the ensemble of the Düsseldorfer Schauspielhaus in 2006, where he stayed until 2012. At the same time he remained active mainly as a television actor. He was regular in the eight-part series "Das Beste aus meinem Leben" (2006), took on guest roles in various other series and appeared in numerous television plays. The most notable of the latter are the divorce comedy "Woche für Woche" (2008), the family drama "Wohin mit Vater?" (2009, director: Tim Trageser), the bitterly angry thriller grotesque "Das Ende einer Maus ist der Anfang einer Katze" (2011) and the thriller "Der Verdacht" (2011, director: Matti Geschonneck).

On the big screen Wagner portayed the patronizing acquaintance of the main characters in Maren Ade's award-winning relationship study "Alle Anderen" ("Everyone Else", 2009), and the father of the title character in the Second World War drama "Lore" (2012). Wagner was nominated for the German Film Critics' Prize for his role in "Ende der Schonzeit" ("Closed Season", 2012) as a farmer, who hides a Jewish refugee during the Holocaust.

After leaving the ensemble of the Düsseldorf Schauspielhaus in 2012, Wagner concentrated for several years entirely on working in front of the camera. He took part in numerous television plays, among them "Der Rücktritt" (2014) in which he starred as the as the editor-in-chief of the German tabloid Bild, Kai Diekmann. He was awarded the German Television Crime Prize 2014 for his "outstanding achievement" in "Polizeiruf 110 - Der Tod macht Engel aus uns allen". He also had recurring roles in a number of TV series: In the Dramedy series "Männer! Alles auf Anfang" (2015) he played a roommate of abandoned husbands, in the crime series "Kommissarin Heller" he starred as the title character's colleague from 2014 on. Wagner left this series in 2017 after eight episodes to form the new "Tatort" team Freiburg with Eva Löbau (team Tobler and Berg). In 2016 he also began working at the Berlin Schaubühne.

On the big screen he played a supporting role as a bisexual artist in "Stiller Sommer" (2013) and a successful guy and show-off in the satire "Affenkönig" ("Monkey King", DE/CH 2016). In Jan Speckenbach's "Freiheit" ("Freedom", 2017) he was a husband and father suddenly abandoned by his wife (Johanna Wokalek). He had smaller supporting roles in "Die Blumen von gestern" ("Bloom of Yesterday", 2016) and "Heute oder morgen" ("Before We Grow Old", 2019). In leading roles Wagner was seen as a big fraud in the TV satire "Big Manni" and as a melancholic neighbour of a comic artist in the movie "Electric Girl" (both 2019).