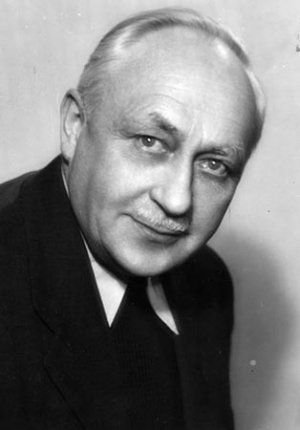 Erich Karl Heinrich Kettelhut, born November 1, 1893, in Berlin, as the son of a master tailor, already started to sketch and draw during his school days. In that time he also met scene painter Falk who later became his teacher at the scene painting shop Franz Schultz in Berlin where Kettelhut became a trained craftsman and artisan. During his apprenticeship he carried out painting jobs at provincial theatres. In 1909/10, Kettelhut became an employee of the Berlin company Hartwig & Co. Together with Otto Hunte, he did theatre decorations at Stadttheater Aachen. Then, in 1910/11, Kettelhut became the head of scene painting of the Huege company in Mühlhausen in Thuringia.

In 1914, Kettelhut was drafted for the infantry. After the end of the war, Otto Hunte and Karl Vollbrecht placed Kettelhut at the Berlin-based fitting company of Martin Jacoby-Boy. In April of 1919, Joe May appointed him as the assistant architect and head of the sketching and painting studio of his eight-part movie "Die Herrin der Welt" that was made in the Berlin-Weißensee studios.

In 1920, Kettelhut was employed by Erich Pommer for Decla-Bioscop, and then for Ufa in 1921. Fritz Lang appointed him together with Hunte and Volllbrecht as the executive architect of "Dr. Mabuse, der Spieler" ("Dr. Mabuse: The Gambler"). The same team, under the direction of Hunte, also did the constructions for "Die Nibelungen". Their third collaboration was the equally elaborate scenery for "Metropolis". After a short stint at Fox Europe for Walther Ruttmann's "Berlin, die Sinfonie der Großstadt" ("Berlin, Symphony of a City"), Kettelhut worked exclusively for Pommer from 1927 to 1932 and designed the productions of "Asphalt", the Harvey operettas as well as the Albers adventure films, including the "Aircraft Platform 1" in "F.P.1 antwortet nicht" ("F.P.1 .Doesn"t Answer").

During the 1930s, Kettelhut became Ufa's best-known architect alongside Fritz Maurischat and the Herlth/Röhrig team. From 1936 on, he mainly designed constructions for Georg Jacoby's music and revue films.

After the end of the war, Kettelhut continued his collaboration with Jacoby. He also worked with Pommer again and collaborated several times with Josef von Baky. He did the production design for the submarine films "Haie und kleine Fische" ("Sharks and Little Fish") and "U 47 – Kapitänleutnant Prien" ("U-47 Lt. Commander Prien"). One of Kettelhut's last films was Lang's "Die 1000 Augen des Dr. Mabuse" ("The Thousand Eyes of Dr. Mabuse"). He then ended his career with the production design for several NDR TV movies.