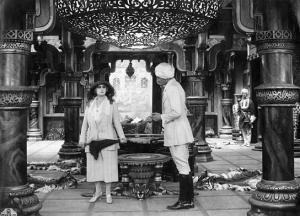 When Irene wants to see her fiancé again, she learns from Yoghi Ramigani that he has been banished as a leper. In order to save Roland, she wants to sacrifice herself, but Ramigani heals him in the temple of the deity before her eyes.

Mac Allan has meanwhile managed to escape from the dungeon into the chambers of Irene and Rowland. When the prince finds him there, he has him walk through the court of tigers with the promise that nothing will happen to him. But shortly afterwards, the English officer is killed by the animals. Now the revenge of the Maharajah concentrates entirely on his wife, the cheater. To save her, Rowland and Irene flee with her to the mountains. But they are discovered, and the princess plunges into the depths. Next to her corpse the prince collapses. Rowland finally begins to build the tomb. The prince, broken by his revenge, spends his life from now on as a penitent on the steps of the tomb of the beloved woman.