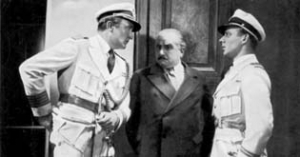 Captain Craddock is sailing under the flag of the insolvent Balkan State Pontenero. The crew and Craddock himself haven't been paid their salaries for a long time, so he refuses to take Queen Yola I. as a passenger on his kreuzer. Instead he heads to Monte Carlo where he wants to confront the consul of Pontenero with his complaint.
In a casino he meets a girl beeing none other than Yola I., who decided to travel after Craddock incognito. Fate takes its course as he looses a fortune playing roulette - in order to get his money back, Craddock threatens the director of the casino to attack with his artillery.