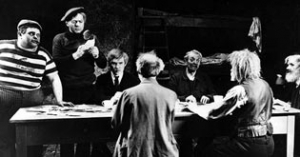 Dr. Mabuse, The Gambler: The Great Gambler, A Picture Of Our Time (Part 1)

Dr. Mabuse, the Gambler is a two-part (The Great Gambler, A Picture of Our Time and Inferno, Men of Our Time) silent thriller. Both parts were extensively restored and reconstructed in 2000.

Dr. Mabuse, the "man with 1000 faces", is a sinister criminal. He uses his enormous hypnotic powers and extraordinary ability to continuously change his identity and gain power over his victims. He manipulates the stock market, prints counterfeit money and toys with the weaknesses of the rich and influential. In illegal casinos, he hypnotizes his opponents, thus causing them to lose all their money to him. He even uses the seductive powers of the beautiful dancer Cara Carozza to get to a wealthy, young American. However, Mabuse′s clever plan is disrupted by the plodding and methodical detective von Wenk, who seems to be able to resist Mabuse′s evil powers.

Then Mabuse plots to murder von Wenk and manages to knock him out and throw his body into a lake. However, before it is too late, von Wenk is saved. In the meantime, Mabuse goes to a party hosted by Countess Told, who has asked von Wenk for his support. Mabuse hypnotizes Count Told and entices him to gamble. Suddenly, the Countess faints and Dr. Mabuses kidnaps her as his new victim.