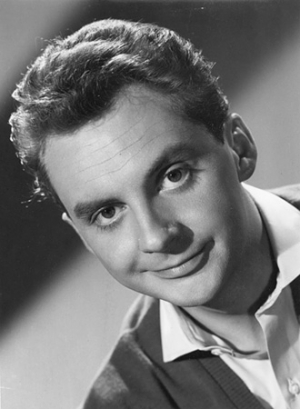 Harald Juhnke, whose birth name was Harry Heinz Herbert Juhnke, was born on 10 June 1929 in Berlin-Charlottenburg and grew up in the then working class district of Wedding. Already as a teenager, he made the decision to become an actor. After graduating from high school, he began to study music and took acting lessons with Marlise Ludwig in 1948. In the same year, on November 9, 1948, he made his stage debut in Berlin: In the "Haus der Kultur der Sowjetunion" he played a Russian officer in a production of Konstantin Trenjow's "Lyubov Yarovaya". This was followed by stints with the travelling ensemble "Die Vaganten" as well as with the Theater Neustrelitz (1949) and the Freie Volksbühne Berlin (1950).

Harald Juhnke made his film debut in 1950 with a supporting role as a pastor in Carl Froelich's comedy "Drei Mädchen spinnen". Although he still mainly worked as a stage actor, Juhnke made a name for himself in the further course of the 1950s as a sought-after and popular screen actor, at first mainly in supporting roles: in the marriage story "Die Stärkere" (1953) he played an admirer of the female main character, in the period love movie "Das tanzende Herz" ("The Dancing Heart", 1953) he was the assistant of a brilliant court mechanic, in the military film "Heldentum nach Ladenschluß" (1955) a soldier lacking discipline, in the pop movie "Unter Palmen am blauen Meer" ("Beneath the Palms on the Blue Sea", 1957) a sly bandleader and in the war movie "U 47 - Kapitänleutnant Prien" (1958) a submarine cook. Juhnke himself had a relaxed attitude to his film roles of this time. In his 1982 autobiography, he wrote: "When the telephone rang and some dubious guy offered me a film role, in the 1950s I was only interested in three questions: How much is the fee for this nonsense? How pretty are my partners? Where is the thing shot, how sunny is it there?"

When he started working for TV in the mid-1970s, Juhnke's popularity gained another enormous boost: he played a gallant reception manager in the hotel series "Unter einem Dach" (1974) and took over the title role from Peter Frankenfeld in the second season of the crime series "Sergeant Berry" (1975). Another great success was the show "Ein verrücktes Paar" (1977-1980), which consisted of individual sketches and in which he starred alongside Grit Böttcher. From 1979 (and until 1984) Juhnke moderated the extremely popular TV show "Musik ist Trumpf". This show made him one of the most popular stars of German television. As a showmaster and entertainer in his tuxedo and patent leather shoes, his image was that of a bonvivant of the world with which he wanted to follow the footsteps of his declared role model Frank Sinatra. He also recorded a German version of the classic Sinatra song "My Way", which, like his song "Barfuß oder Lackschuh" was a great success. In the course of his career he released eleven studio albums.

Beside his appearances as show master, Juhnke played roles in several TV films and series in the 1980's and had a leading role in Wolf Gremm's social comedy "Sigi, der Straßenfeger" in 1984. From 1987 he took over the role of the flea dealer Kinkel in the pre-primetime series "Drei Damen vom Grill", from 1987 to 1989 he starred in the sketch series "Harald und Eddi" alongside Eddi Arent. Juhnke was also active as a dubbing artist throughout his career. Among others, he was the German voice of Marlon Brando, Charles Bronson, Peter Falk, Peter Sellers and Woody Allen.

In 1990, he appeared on stage in the title role of Molière's "Der Geizige" ("The Miser") at Berlin's Renaissance Theater. Also on screen, he proved his abilities as a multi-layered character actor. He was awarded the Ernst Lubitsch Award for his role as head of the department of the magazine "Stern" in Helmut Dietl's award-winning satire "Schtonk!". His performance in "Der Papagei" (1992), as a crippled actor who gets roped in by a right-wing extremist party, earned him the Bavarian Television Prize for Best Actor. He also received much critical praise for his title roles in the film adaptation of Fallada's "Der Trinker" (1995) and the adaptation of Zuckmayer's "Der Hauptmann von Köpenick" (1997). He had already played the Hauptmann von Köpenick with great success at the Maxim-Gorki-Theater in Berlin. Critics also regarded Juhnke's intensive performance in "Der Trinker" as an examination of his own alcohol addiction, which had been known for many years.

Until the year 2000, Juhnke took part in several television films, including the tragicomedy "Silberdisteln" (1998), in which several residents of a nursing home defend themselves against a harassing carer, the comedy "Letzte Chance für Harry" (1998), in which Juhnke played a homeless man who pretends to be a wealthy company owner, and the love story "Vor Sonnenuntergang" (2000), about a widower whose family wants to destroy his new love for a younger woman.

Over the decades, Harald Juhnke had repeatedly made headlines with his severe alcohol addiction; at times the illness had even been romanticized by the tabloids as part of his image. After a last alcohol relapse in 2000, he was diagnosed with Korsakov's syndrome, a severe form of memory loss. In 2001, it was announced that Juhnke would never act again. He spent the next few years in a nursing home near Berlin. On April 1, 2005, Harald Juhnke died from the effects of his illness.