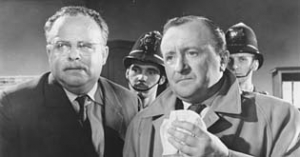 Face of the Frog

This was the first film of the Edgar Wallace series by Rialto, a Danish production company, for the German film distributor Constantin, filmed with German actors in Copenhagen: In London, the Frog gang, whose members have a frog tattooed to their underarms and whose leader always wears a frog mask, is making trouble. The gang′s leader is heavily interested in the young and beautiful Ella Bennett but the same counts for smart Richard Gordon, nephew of Sir Archibald, the head of Scotland Yard, and hobby detective, who together with his elegant, yet hard-hitting butler James tries to solve the case of the Frog gang. But there are many suspects to consider. One of them is John Bennett, the father of Ella and Ray. Both have no clue what their father is doing on his trips to London or what the contents of his black suitcase are that he is always taking on his trips. All loose ends meet at the Lolita bar where a lady called Lolita is singing "Nachts im Nebel an der Themse".