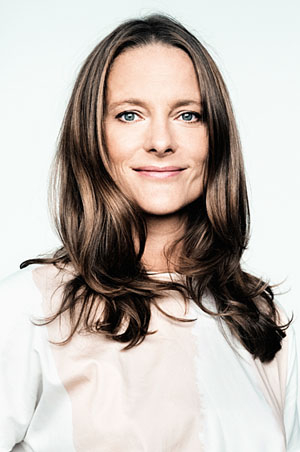 Anne Ratte-Polle, born 1974 in Cloppenburg studied acting at the Rostock University of Music and Theatre. In the course of her studies, she was awarded the prize for solo-performance at the German-speaking acting students' meeting in 1999. Having graduated university, she was engaged by the Staatstheater Cottbus where she received the state of Brandenburg's sponsorship award for performing arts for her title roles in "Effi Briest" und "Die Marquise von O.". At the same time, she appeared in guest performances at the Volksbühne Berlin and the Düsseldorfer Schauspielhaus. In 2002, Ratte-Polle became member of the Staatstheater Hannover's permanent ensemble. She took part in highly acclaimed productions such as "Dantons Tod" (2003), "Die Katze auf dem heißen Blechdach" (2004) and "Was ihr wollt" (2004). In 2005, Ratte-Polle moved to Berlin where she could be seen on stage mainly at the Volksbühne, but also at the Deutsches Theater and the Maxim Gorki Theatre.

In addition to her extensive work in theatre, Anne Ratte-Polle has been acting in film and TV productions frequently. After playing bit parts in episodes of "Dr. Sommerfeld – Neues vom Bülowbogen" (1996) and "Hotel Elfie" (1999), she debuted in her first feature film, Hermine Huntgeburth's thriller "Stunde des Wolfs" (2000, TV). Smaller roles in Christopher Stark's Love Parade drama "Julietta – Es ist nicht, wie du denkst" (2008) and Franziska Buch's feature "Emil und die Detektive" ("Emil and the Detectives", 2001), as well as guest appearances in TV serials like "Polizeiruf 110" and "Großstadtrevier" were to follow. In 2003, she was nominated for the Deutscher Fernsehpreis (German Television Award) for her supporting role in the episode "Doppelter Einsatz: Einer stirbt immer" (2002).

Anne Ratte-Polle first starred on the big screen alongside Frank Giering in Romuald Karmakar's intimate "Die Nacht singt ihre Lieder" ("Nightsongs"), based on the stage play by Jon Fosse. The film premiered in the Berlin IFF's competition in 2004 but received very mixed reviews among critics. She made a lasting impression on the movie audience in her role in Andreas Dresen's "Willenbrock" (2005) as a literature student who arouses the interest of a used-car dealer significantly older than her, and as an unemployed and isolated freelancer in Gesine Danckwart's ensemble film "Umdeinleben" ("LifeTimeShort", 2008). In the "Schimanski"-episode "Schicht im Schacht" (2008, TV) she convincingly portrayed a rape victim who takes murderous revenge. Between 2009 and 2013, Ratte-Polle focused on TV productions like "Der Tote im Spreewald" (2009) and "Ein Fall für Zwei" (2012) apart from a bit role in the 2010 episode film "Shahada".

In 2013, she could be seen in two movies on the German big screen: In the family drama "Die feinen Unterschiede" ("Our Little Differences") she played the lover of a single father and in Nicolas Wackerbarth's character study film "Halbschatten" ("Everyday Objects") she starred as a woman who has to take care of a friend's kids in Southern France unexpectedly.

After guest-roles in several TV shows, Anne Ratte-Polle starred in two productions, both of which premiered at the 2015 Berlin IFF: In the acclaimed drama "Wanja", she plays an ex-convict who tries to start over while struggling to save a 16-year-of-girl from becoming a criminal. In Michael Krummenacher's "Sibylle" ("Like a Cast Shadow", 2015) she convinces as the titular character who is haunted by a traumatic experience and becomes increasingly paranoid. Both films opened in cinemas in 2016.

For her performance in "Sibylle" ("Like a Cast Shadow") she was awarded Best Actress at the Dark Frame Film Festival in Santa Fe (USA).

Ratte-Polle also played an important role in the tragicomedy "Die Hannas" ("The Hannas", 2016), as a good friend of the title-giving couple. In the same year she belonged to the ensemble of Omer Fast's experimental feature film "Continuity". On television she appeared in leading roles in two "Tatort" episodes: "Hundstage" (directed by Stephan Wagner) showed her as the mother of a son who keeps a dark secret; in "Narben" (directed by Torsten C. Fischer) she played the wife of a doctor and war criminal. Ratte-Polle also took on guest roles in other series; in 2017 she belonged to the large ensemble of the ten-part series "Dark" (Netflix, director: Baran bo Odar).

In addition to her numerous appearances in front of the camera, Anne Ratte-Polle has also been active as a theatre actress. In 2017 she played Little Red Riding Hood at the Schauspielhaus Zurich in "Grimmige Märchen"; in 2018 she played as Donald Trump at the Munich Kammerspiele in the play "Jedem das Seine".

On the big screen in 2019 she starred in the intimate, bitter tragicomedy "Der Geburtstag" ("Many Happy Returns") and in the award-winning relationship drama "Es gilt das gesprochene Wort" ("I Was, I Am, I Will Be"). In addition, the second season of "Dark" was released in the summer of 2019, in which Ratte-Polle once again portrayed the grandmother of the main character Jonas at a young age.