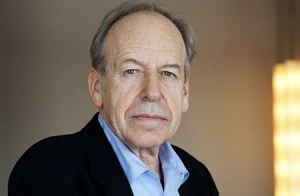 Rüdiger Vogler was born May 14, 1942, in Warthausen. After taking actor's training at Heidelberger Schauspielschule from 1963 to 1965, Vogler was a cast member of Frankfurt's "Theater am Turm – TAT" and appeared in several of Peter Handke's plays. Handke also gave him his first part in a TV movie called "Chronik der laufenden Ereignisse". Shortly after that, Vogler played his first movie part in Wim Wenders' "Die Angst des Tormanns beim Elfmeter" ("The Goalkeeper's Fear of the Penalty Kick"), an adaptation of Peter Handke's novel of the same name.

From then on until the 1990s, Vogler was one of Wim Wenders' favourite actors. He portrayed the awkward, but amiable private investigator Phillip Winter in "Bis ans Ende der Welt" ("Until the End of the World", 1991), "In weiter Ferne, so nah!" ("Faraway, So Close!", 1993) and "Lisbon Story" (1994) but did not rise to international stardom despite such prestigious roles. In addition to his numerous TV appearances in series like "Tatort" ("Crime Scene") or movies like "Verführung in sechs Gängen", Vogler, who often portrays sensitive characters or demure outsiders, played striking minor parts in major productions like "Anatomie" ("Anatomy"), "Sass", or "Leo und Claire" ("Leo & Claire" / "One Kiss").