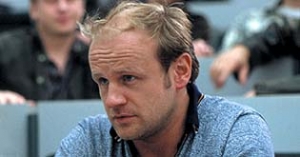 Oliver Stokowski, born August 8, 1962, in Kassel, studied music from 1982 to 1985 and subsequently attended Hochschule für Musik und Darstellende Kunst in Graz, Austria. In 1989, he graduated with a "Magister of Arts" in the department of acting. In the same year, Stokowski landed an engagement at Hannoveraner Staatstheater, where he performed in productions of classic plays including "Onkel Wanja" ("Uncle Vanya") or "Die Dreigroschenoper" ("The Three-Penny Opera"). He then worked at Bayerisches Staatsschauspiel (1993), at Vienna"s Burgtheater (1996), and at Salzburger Festspiele (1996), before he became a cast member of Munich"s Residenztheater where he stayed for seven years. Since the 2005/06 season, Stokowski is a cast member of Zürich"s Schauspielhaus.

Stokowski made his movie debut in 1989 in the TV comedy "Tiger, Löwe Panther", directed by Dominik Graf. In 1996, he made a striking appearance on the big screen in a key supporting role in Rolf Silber"s comedy "Echte Kerle" ("Real Guys"). He even had the final punch line of the film. Since then, despite the success at the box office and rave reviews, Stokowski has almost exclusively been seen in TV productions – although he rarely stars in trivial TV series or romantic films but mainly in ambitious productions such as Lars Becker"s "Landgang für Ringo" (1996), Grafs "Der Skorpion" ("The Scorpion", 1997),"Die Geisel" (2002) by Christian Görlitz, or in sophisticated TV crime series like "Polizeiruf 100" (1998 to 2002) or "Der Ermittler" (2001 to 2005).

Stokowski caused a stir on the big screen in Oliver Hirschbiegel"s psychological thriller "Das Experiment" ("The Experiment", 2001). After playing supporting roles in Hans W. Geissendörfer"s "Schneeland" ("Snowland", 2004) and in "Die wilden Hühner und die Liebe" ("Wild Chicks in Love", 2007), Oliver Stokowski starred in another leading role in 2008. In the tragicomedy "Friedliche Zeiten" ("Peaceful Times"), he plays a GDR citizen, who experiences a severe family crisis after their escape to West Germany.