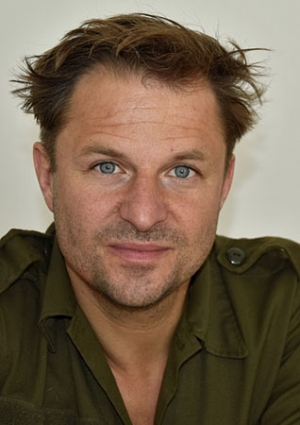 Philipp Hochmair was born in Vienna on 16 October 1973. From 1993 to 1997 he studied acting at the Max Reinhardt Seminar in Vienna, where he was a master student of Klaus Maria Brandauer, and at the Conservatoire national supérieur d'art dramatique in Paris. During this time he played his first small screen role in Claude Berri's "Lucie Aubric" (FR 1996). After graduating he appeared in plays at the Schauspielhaus Hamburg, the Volksbühne Berlin and the Schauspielhaus Zürich.

From 1999 on, Hochmair also appeared regularly in TV and big screen productions. In Oliver Hirschbiegel's successful thriller "Das Experiment" ("The Experiment ", 2001) he was a member of a team of scientists, in Heinrich Breloer's "Die Manns - Ein Jahrhundertroman" ("The Manns - Novel of a Century", 2001) he impersonated Golo Mann. Florian Baxmeyer cast him in a supporting role in the award-winning short film "Die rote Jacke" ("The Red Jacket", 2002), and subsequently in a leading role in the TV thriller "Mörderische Elite" (2003).

Also in 2003 Hochmair became an ensemble member of the Vienna Burgtheater, to which he belonged until 2009; there he took part in Elfriede Jelinek's "Babel" (2005) and Thomas Mann's "Doktor Faustus" (2008). During these years Hochmair only appeared occasionally in front of the camera, for example as the son of Josef Bierbichler in "Winterreise" ("Winter Journey", 2006, director: Hans Steinbichler), as well as in smaller series supporting roles.

In 2009 he transferred from the Burgtheater to the ensemble of the Hamburg Thalia-Theater, where he stayed until 2014 playing Templar in "Nathan der Weise" and Mephisto in "Faust I und II" (2011) among other roles. At the same time, he was frequently seen in television and cinema productions. In Marie Kreutzer's feature film "Die Vaterlosen" ("The Fatherless", AT 2011) he played the son of a former hippie family, in the TV thriller "Blutadler" (DE/AT 2012) he starred as a psychopathic serial killer. In the Austrian production "Der Glanz des Tages" ("Shine of Day", 2012) Hochmair played himself: A successful actor named Philipp, who is confronted with the abysses of real life through two chance acquaintances. The film won awards at the Locarno Film Festival and the Max Ophüls Preis film festival. Nikolaus Leytner's "Die Auslöschung" ("Blank", AT 2013, TV) also had an (indirect) connection to Hochmair's career: in it he played the son of a man suffering from Alzheimer's - embodied by Hochmair's former teacher Klaus Maria Brandauer. He also played an important role in Urs Eggers biopic about the first Nobel Peace Prize winner Bertha von Suttner "Eine Liebe für den Frieden" (AT/DE/CZ 2014) as von Suttner's husband Arthur.

After leaving the Thalia Theater ensemble in 2014, Hochmair concentrated entirely on working in front of the camera, often in Austrian productions. In addition to starring in numerous TV movies, from 2015 he was a regular cast member of the satirical society series "Vorstadtweiber" (AT) playing a highly criminal Viennese minister. For his leading role in the gay relationship drama "Kater" ("Tomcat", AT 2016) he was awarded the Actor Prize at the Diagonale in Graz.  He played further notable roles in the award-winning psychodrama "Animals" (CH/AT/PL 2017), in "Candelaria - Ein kubanischer Sommer" ("Candelaria", CO/DE/NO 2017) and in Josef Bierbichler's "Zwei Herren im Anzug" ("Two Men in Suits", 2018), in which he portrayed a paedophile father. In early summer 2019 Hochmair stood in front of the camera for Christian Lerch's "Das Glaszimmer" (theartical release: 2020). In the drama set in a Bavarian village in 1945, he embodies a strict Nazi who has a firm belief in the "ultimate victory".