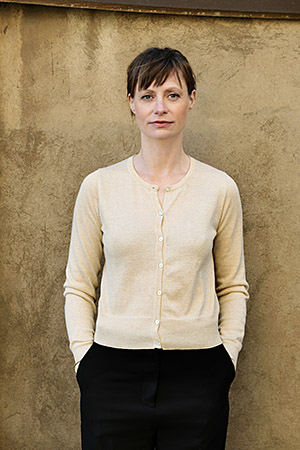 Katharina Schubert, born January 22, 1977 near Wolfsburg, studied acting at Vienna's Max Reinhard Seminar. At the same time, she also studied singing. In 1999, she performed at Vienna's Burgtheater, and was seen at Wiener Festspielwochen in Luc Bondy's production of Botho Strauß's "Lotphantasie" in the same year. In 2001, Schubert became a cast member of Munich's Kammerspiele where she appeared in numerous productions. In 2004, she won the young talent award of Münchener Kammerspiele.

After appearing in two TV movies, Schubert made her debut on the big screen in 2004 in Benjamin Heisenberg's film "Schläfer" ("Sleeper"). After another supporting role in Ben Verbong's children's film "Herr Bello" ("Mr. Woof", 2006), Schubert played the role of Isabella, who participates in a speed dating event, in Ralf Westhoff's "Shoppen" (2006). Furthermore, Schubert starred in several episodes of the TV crime series "Polizeiruf 110" and performs as the singer of the band "The Kapulikaupunki Broken Heart Orchestra". In 2008, Katharina Schubert played the leading role of an overanxious, GDR nostalgic mother in Neele Vollmar's tragicomic family story "Friedliche Zeiten" ("Peaceful Times") alongside Oliver Stokowski. In the same year, Schubert starred in a guest appearance in Heinrich Breloer's major project "Die Buddenbrooks" ("Buddenbrooks - The Decline of a Family"), that opens in cinemas in December.

In addition to roles in Oliver Haffner's "Mein Leben im Off," Ralf Westhoff's "Der letzte schöne Herbsttag" (both 2010), Johannes Schmid's "Wintertochter" ("Winter's Daughter", 2011), Sherry Hormann's "Anleitung zum Unglücklichsein" ("The Pursuit of Unhappiness", 2012) and various TV productions, Katharina Marie Schubert also pursued her own film projects as a director, among them her short films "Wabosch Wilma (Wilde Wilma)" (2009) and "Another fucking...", which premiered at the Hof Film Festival in 2011.

In 2014, she appeared in Ralf Westhoff's comedy hit "Wir sind die Neuen" and played the lead role in Oliver Haffner's "Ein Geschenk der Götter" of an actor who, after losing her job, leads an "obligatory further training measure" for the long-term unemployed on behalf of the employment agency: She rehearses the play "Antigone" with them - with astonishing response. For her performance, Katharina Marie Schubert won the Bavarian Film Award for Best Actress and received a nomination for the German Film Award in 2015.

In the following years, Schubert appeared in several prominent roles: In the children's feature film "Winnetou's Sohn" ("Winnetou's Son", 2015), she was the owner of a small ranch that hosts adventure camps for children; she was part of the award-winning ensemble of Jan Georg Schütte's largely improvised comedy "Wellness für Paare" (TV, 2016); and as ex-girlfriend Thea, she appeared in Andreas Kleinert's Ibsen adaptation "Hedda" (TV, 2016). On stage, she played Polly in the "Threepenny Opera" at Hamburg's Thalia Theater in the 2015/2016 season.

Her main field of activity remained television: Schubert played the distraught mother of a child who suffers brain death after a sports accident in Aelrun Goette's highly acclaimed drama "Atempause" (2017); in Dirk Kummer's award-winning GDR youth story "Zuckersand" ("Sugar Sand") she was the mother of the young main character, and in Wolfgang Murnberger's social comedy "Keiner schiebt uns weg" (2018), she was the employee of a photography company fighting for equal rights. She also had an important role in the social drama "Totgeschwiegen" (2019), as the bourgeois mother of a Berlin teenager who kills a homeless man in a quarrel. Also in 2019, she appeared in three episodes of the popular "Tatort" crime series.

In early 2020, Katharina Marie Schubert made her debut as a feature film director: "Das Mädchen mit den goldenen Händen" ("The Girl With the Golden Hands") is a social study and mother-daughter drama set in the East German provinces of 1999. The film premiered at the 2021 Munich Film Festival and was released in theaters in Germany in February 2022.

Before the release of her film, in 2021, Schubert appeared in a key role in four episodes of the 7-part series "Ferdinand von Schirach - Glauben" ("The Allegation"), a judicial drama that deals with the so-called "Worms Trials" in the 1990s and was awarded prizes for Best Screenplay and for special innovation and overall performance at the Cannes TV festival "cannesseries". Also in 2021, she was in front of the camera for the 6-part ARD drama series "Bonn" (broadcast date: 2022), which is set in 1954 in the then West German capital and deals with historical events in the area of tension during the Cold War.