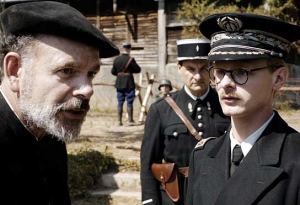 Still from "Das Meer am Morgen"

October 1941. Eighteen months into France’s occupation by German troops, young Communist members of the Resistance shoot dead an officer of the German Army. In retaliation, Hitler demands the deaths of 150 Frenchmen, as 'retribution'. The targets are to be mostly young men believed to share the assassins’ political convictions. Most of these men are taken from an internment camp for opponents of the occupation; a 35-year-old French rural administrator is ordered to select the victims. Although the parish priest appeals to their conscience and moral sensibilities, both the German military and their French helpers slavishly follow their orders …

Volker Schlöndorff’s meticulous reconstruction of events is based on a secret military report written by poet Ernst Jünger, who was an officer in the German Army at the time, as well as the farewell letters of the 150 men. Events are told through the eyes of seventeen-year-old Communist Guy Môquet – who was one of the victims of this act of retribution and was posthumously celebrated in France – as well as the eyes of a German soldier of almost the same age who was a member of the firing squad.