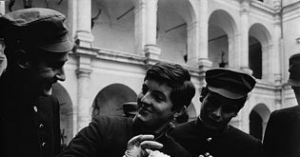 Toerless is a pupil in an ancient and remote boarding school, shortly before the first World War. The school class has developed into a kind of small society with a well-developed ruling clique. Toerless is an individualist who finds it difficult to fit into this society - yet he is generally respected.

One day he finds out that money has been stolen from one of the boys. Soon after, the thief, Basini, who is another schoolboy, is caught, and almost by coincidence, Toerless finds himself taking part in the class′s mock trial. The leaders of the class make use of Basini′s petty crime to blackmail him and to use him as a slave, trying out their obscure theories of life on him. Their supposedly intellectual experiments result in almost sadistic excesses. Toerless watches the distribution of power between these young men and their slave and the behaviour of the rest of the class, who follow the whole proceedings as if they were the Chorus in a Greek tragedy. What Toerless sees awakens in him a feeling of moral obligation. He advises Basini to turn himself in. In this way, the matter is brought to the attention of the school authorities. Toerless tries to justify himself to his teachers, but they find it difficult to comprehend his explanations. He leaves the boarding school, proud of his realizations, in fact, he is already on the way to becoming a man without distinction.