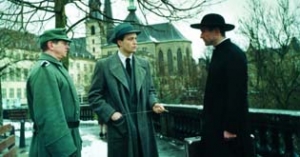 The Luxembourger Abbé Kremer has nine days to reach a decision about life or death. A decision that shakes the very foundations of his beliefs and which will not only determine his own fate, but that of his family and friends.

Henri Kremer has been temporarily released from the Dachau concentration camp, an unheard-of situation with a diabolical twist. Gebhardt, the young, fanatical Gestapo chief of Luxembourg, presents him with an alternative: either he joins forces with the Nazis, supports their undertakings, and remains a free man, or he will be thrown back in prison, and his sister Marie and other priests already interned in the camp will suffer the fatal consequences. Nine days long the Nazi and the priest carry out a fierce battle of ideologies, a clash whereby Gebhardt tries to win over the priest by professing his own Christian faith and Kremer has to reconcile the consequences of his decision with his conscience.

In "The ninth Day" Volker Schlöndorff has taken up a topic in which there is no right or wrong, no clear differentiation between good and evil, but rather where – much as in "The lost honor of Katharina Blum" or "Germany in autumn" – a profoundly political decision has to be taken. Schlöndorff’s chamber piece represents one of the most telling confrontations with the German past.