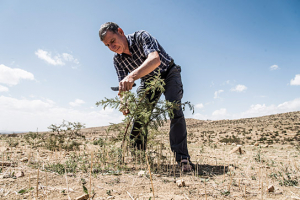 In 1981, young Australian agronomist Tony Rinaudo arrives in Niger to fight the growing desertification. After a few failures, he discovers a massive root network beneath the supposedly dead soil. With his new technique of reactivating the still-living tree stumps and roots, he is able to revolutionize African agriculture and forestry and give new hope to countless people.

In his first documentary, Volker Schlöndorff portrays a remarkable man whose life's work was awarded the so-called Alternative Nobel Prize in 2018.