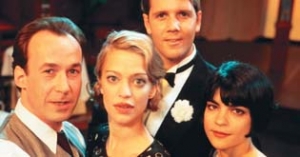 
Even during his vacation, Kurt is pursued by legal action initiated by the army of the German Reich. In one of his articles he had made the statement that "all soldiers are murderers" - a statement that is still highly controversial. Kurt sees the brownshirts looming on the horizon and decides not to return to Germany.
Tucholsky once wrote: "You often think that love is stronger than time, but time is always stronger than love." This is what the four summer guests Kurt, Lydia, Karlchen, and Billie have to admit to themselves at the end of their sensual and boisterous, melancholic and bitter journey to the North. It is the summer of 1932, and soon nothing will ever be the same again.