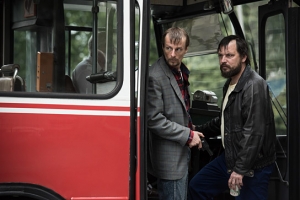 TV two-parter reconstructing the Gladbeck hostage crisis: On August 16, 1988, Hans-Jürgen Rösner and Dieter Degowski rob a bank in Gladbeck, in the northern Ruhr region. When the police, alerted by a neighbor, show up, the situation comes to a head. Degowski and Rösner take two bank employees hostage and demand a ransom and a getaway car. This marks the beginning of a two-day escape from the police that leads across Germany and all the way to Holland. On the way, Rösner's girlfriend Marion Löblich joins them. In Bremen, the criminals hijack a public bus and take the passengers hostage - one of whom, 14-year-old Emanuele de Giorgi, is shot dead. Again and again, there are devastating mistakes and mishaps on the part of the police. Meanwhile, sensationalist reporters from a wide variety of media outlets massively seek to get close to the hostage-takers. They follow the escape vehicles, conduct live interviews, negotiate with the criminals on their own authority and even give them clues. Finally, an SEK ends the hostage situation, but another hostage, 18-year-old Silke Bischoff, dies.