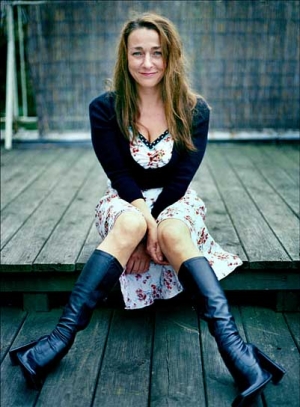 Steffi Kühnert was born in East-Berlin on February 19, 1963. After completing an apprenticeship as a tailor, she studied acting at the renowned Ernst-Busch-Schule in Berlin from 1981 to 1985. Subsequently, she worked at numerous theatres in the German Democratic Republic. Between 1988 and 1992, she was an ensemble member at the Weimar National Theatre, where she frequently and successfully collaborated with Leander Haußmann.

After the fall of the wall, she played at theatres in Bochum, Munich, Vienna, Salzburg and Zurich. Her most memorable performances included the titular roles in Ibsen's "Nora" (1990) and in "Antigone", which premiered at the 1993 Salzburg Festival. The same year, she was awarded the Federal Cross of Merit for her achievements as an actress in East and West Germany. Since 2005, Steffi Kühnert is an ensemble member at the Schaubühne in Berlin. Amongst others, she performed in Tschechow's "Drei Schwestern" (2006) and "Der Kirschgarten" (2008).

Although she already appeared in a few East-German film- and TV-productions, Steffi Kühnert really started to venture into film in the mid-1990s. She had supporting roles in Detlev Buck's "Männerpension" (1996) and Leander Haußmann's "Sonnenallee" (1999), before taking on her first leading role in Andreas Dresen's "Halbe Treppe" (2002) – instantly winning the ensemble award at the 2002 Chicago Film Festival. Among her other film projects were "Der große Schlaf", "Die Bluthochzeit", "Im Schwitzkasten", Michael Haneke's multiple award-winning drama "Das weiße Band - Eine deutsche Kindergeschichte" and the horror film "Wir sind die Nacht". In television, she appeared in a lauded episode of the series "Polizeiruf 110", Lars Kraume's drama "Guten Morgen, Herr Grothe", and in the TV adaptation of the bestselling novel "Moppel-Ich" (2007).