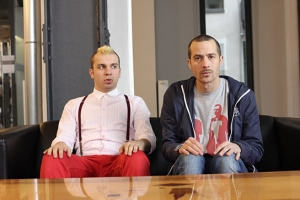 Not long ago, Adam was a notorious hacker. Now, he has a legitimate job as a programmer, yet he is still convinced that he is the only reasonable person in the world. To put it short: Adam is still a paranoid, misanthropic nerd who lacks all basic social skills. When he is asked to update the computer security protocols of a research institute which explores happiness, a fateful incident occurs: Following a hacker attack, all the precious test bunnies suddenly disappear. Scientist Helen accuses Adam of sabotage, and her suspicion seems reasonable for the bunnies inexplicably appear in the house of Adam's family. The computer expert sees only one chance to clear his name of the allegations: He has to find the real culprit on his own. With the help of his oddball brothers, Adam starts an adventurous virtual investigation — and unwillingly becomes a web activist in the process.