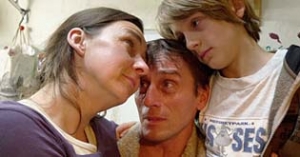 
Childhood days are history for 10-year-old Jakob. His father Juergen and mother Silke are out of work and have long since surrendered to their alcohol problems. Violence and heated arguments alternate in the family with tender moments. Grandma Rosemarie is the only one who seems to give the family’s chaotic life a certain grounding. And then there’s Hannah, Jakob’s girlfriend from a well-to-do family, who remains loyal to Jakob despite her parent’s lack of understanding and the mobbing from her fellow pupils.

When Jakob’s mother has to go to the hospital after the latest bust-up, his father completely loses control. A catastrophe is in the cards with Jakob doing everything to preserve the illusion of a normal family life. After all, there’s one thing he’s certain about: if the family falls apart, he will have to go into a home and that’s something he wants to avoid at all costs.

Quite unexpectedly, help and understanding is forthcoming from his girlfriend Hannah who turns out to be a very pragmatic companion.

A modern Berlin backyard ballad in the tradition of the German auteur film: drastic, bizarre and close to the reality of the reunited Germany.