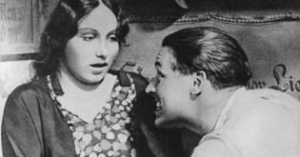 Farewell
A young couple, Peter Winkler and his fiancée Hella, live at the pension "Splendide" together with a group of other guests who all look back on a life full of disappointments. Peter and Hella want to marry but lack the necessary money. Then, Peter gets a new, and better, job in Dresden and wants to surprise Hella with the good news. But Hella had already heard about Peter′s new job because Peter had told the news to everybody else. In turn, Hella keeps quiet about her own problems: When she had bought a skirt and a hat, she ran out of money. Thus, she borrows the money from another guest and sneaks back to the store to get her new clothes. Now, Peter gets jealous. When he learns about the borrowed money he believes that Hella is cheating on him. Thus, Peter leaves the pension in a rush. When Hella comes back from the shop, she learns what has happened and is deeply unhappy. But now it is too late to talk things out and Hella is left alone and desperate.