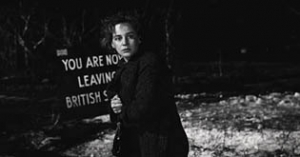 Ambitious adaptation of Gerhart Hauptmann′s play: At the beginning of the 1950s, Pauline Karka, a pregnant and penniless woman, comes to Berlin. There she meets up with Mrs John, the owner of a laundry shop who always wanted a child but could not get pregnant. After the birth of Pauline′s child, both women agree that Mrs John should take care of the newborn and pretend that it is her own. But Pauline, who is leaving for West Germany, wants to see her child for one last time. Mrs John denies and Pauline by mistake abducts the terminally ill child of Mrs John’s neighbour. Then Mrs John instructs her brother, Bruno, to kill Pauline. But Bruno accidentally kills himself and Mrs John finally confesses to the police.