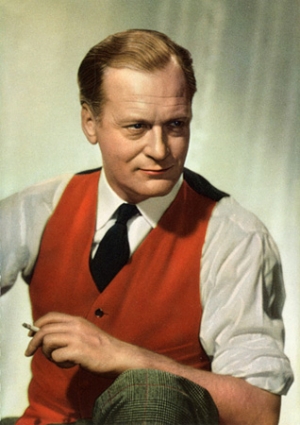 In 1935, Willi Forst brought him to the cinema. Jürgens then made his screen debut as young Emperor Franz Joseph in Herbert Maisch's "Königswalzer" ("The Royal Waltz") but did not play in any leading part in the following years. After the end of the war he starred in several Austrian productions and went back to Germany in 1950 to play a series of parts of smart lovers and handsome men, for example as a cavalry captain in "Der letzte Walzer" ("The Last Waltz").

His rise to fame started with his performance as Air Force General Harras in Helmut Käutner's "Des Teufels General" ("The Devil's General"), an adaptation of Carl Zuckmayer's famous play. Furthermore, Jürgens starred in the role of Bruno Mechelke in Robert Siodmak's adaptation of Gerhart Hauptmann's play "Die Ratten" ("The Rats") and alongside Yves Montand in "Les héros sont fatigués" ("Heroes and Sinners") by Yves Ciampi which made him an international star.

In the following years, Jürgens worked together with many international stars. He starred alongside Brigitte Bardot in Roger Vadim's "Et dieu créa la femme" ("...And God Created Woman", 1956) and as Robert Mitchum's counterpart as German submarine commandant von Stolberg in Dick Powell's "The Enemy Below" (1957) and played a Chinese army officer alongside Ingrid Bergman in "The Inn of the Sixth Happiness" (1958) by Mark Robson and a permanent passenger on a ferry in constant conflict with the captain, played by Orson Welles, in Lewis Gilbert's "Ferry to Hong Kong" (1959).

His most important international performance was the role of Colonel Prokoszny in the adaptation of Franz Werfel's play "Me and the Colonel" alongside co-star Danny Kaye. Apart from various ambitious parts in movie as well as TV productions, Jürgens starred in several commercial entertainment movies, for example in the 1970s series of "St. Pauli" movies.

Besides his work in movie productions, Jürgens also performed on stage and directed four movies, as well. The way Jürgens led his private Life corresponded to the majority of his movie parts. The gruff bon vivant and ladies' man was married five times: He married actress Lulu Basler in 1938, actress Judith Holzmeister in 1947 and Eva Bartok, another actress, in 1955. From 1958 to 1977 he was married to model Simone Bichéron, and from 1978 on to Margie Schmitz.

Curd Jürgens died on June 18, 1982, in Vienna and was buried at Vienna's Zentralfriedhof.