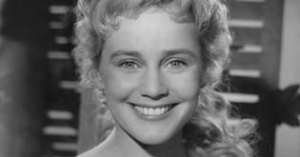 Maria Margarete Anna Schell was born in Vienna on January 15, 1926. Her siblings Carl, Maximilian and Immy also worked as actors. Schell went to school in Switzerland and in an Alsatian monastery. After a commercial education, singing instruction and actor's training in Zürich, Schell worked at theatres in Bern and at Vienna"s Kammerspiele. In 1950, she performed as Gretchen in "Faust" on a tour with Albert Bassermann before taking to guest performances in several countries. Already in 1942, Schell starred in her first movie, the Swiss melodrama "Steinbruch", alongside Heinrich Gretler and her mother Margarete Noé von Nordberg. In 1950, she rose to national fame with her performance in "Der Engel mit der Posaune" ("The Angel with the Trumpet"). From then on, she became a star of the German cinema of the Adenauer years, mainly as sensitive woman on the brink of tears.

Schell's first international success was the character role of a head nurse in a military hospital in Helmut Käutner's anti-war movie "Die letzte Brücke" ("The Last Bridge") that won at the Cannes Film Festival in 1954. In 1956, Schell won the "Coppa Volpi" for the title role of a laundress in René Clément's naturalistic adaptation of Zola's play "Gervaise". From 1957 on, she starred in several MGM productions of best-selling novels, like in Richard Brook's "The Brothers Karamazov" with Yul Brynner, or John Frankenheimer's two-part TV drama "For Whom the Bell Tolls". She then played with Glenn Ford in "Cimarron", as well as with Gary Cooper in "The Hanging Tree". Furthermore she starred in films by Philippe de Broca, Claude Chabrol, or Jacques Rouffio.

Besides her movie career, Schell still managed to perform on stage in France, Switzerland, Germany and Austria where she performed at the 1955 and 1979 Salzburger Festspiele. From the 1970s on, Schell was mainly to be seen in American and German TV productions. In 1977, she was awarded with the Filmband in Gold for her long-time, exceptional work in German cinema. Her last major movie was "Die Spaziergängerin von Sans Souci" ("The Passerby") in 1981.

During the 1990s, Schell's private life became the centre of public attention. After a suicide attempt in 1991 and a series of cerebral apoplexies she completely withdrew from public activities. In 1997, Schell was discharged from an alleged act of bankruptcy. In February 2002, she made her last public appearance in Vienna at the premiere of Maximilian Schell's portrait "Meine Schwester Maria" ("My Sister Maria").