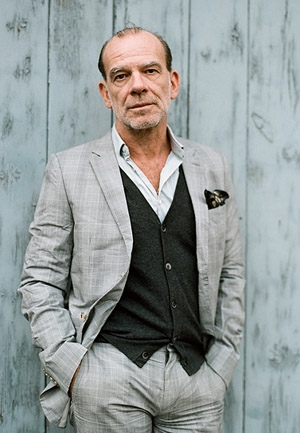 Martin Wuttke was born in Gelsenkirchen on February 8, 1962. He trained as an actor at the Bochum Figurentheater-Kolleg (Deutsches Institut für Puppenspiel) before changing to Westfälische Schauspielschule, also in Bochum. Starting in the mid-80s, he found work at numerous German theaters such as Schauspiel Frankfurt where he played the title role of Shakespeare's "Hamlet" in 1985. Further stations include the Deutsches Theater Berlin and the Hamburg Thalia-Theater. In 1992, he was awarded the Körber Stiftung's Boy-Gobert-Preis in Hamburg. Three years later, he received the Getrud-Eysold-Ring for his performance in the title role of Brecht's "Der aufhaltsame Aufstieg des Arturo Ui" (directed by Heiner Müller) at the Berliner Ensemble. The same year, the theater journal "Theater heute" announced him 'Actor of the Year'. To this day (2016), the Berlin Ensemble is showing the "Arturo Ui" production with unabated success.

Still, beginning in 1999, Wuttke shifted his work mainly to the Berlin Volksbühne where he worked with directors like Frank Castorf, Christoph Marthaler and Christoph Schlingensief. The Schlingensief movie "Die 120 Tage von Bottrop" (1997) also marked one of Wuttke's first roles as a film actor. Over the following years, Wuttke remained dedicated to working in theater but also featured in TV and big screen productions, usually in supporting roles. Volker Schlöndorff cast him as a Stasi officer who introduces fugitive left wing terrorists into the GDR in "Die Stille nach dem Schuß" ("The Legends of Rita", 2000). Margarethe von Trotta had him play Joseph Goebbels in the award-winning drama "Rosenstraße" (DE/NL 2003). In the four-part TV movie "Liebesau – die andere Heimat" (2002), a chronicle of a fictitious GDR village from 1953 to 1989, he played a central role as a farmer; the TV crime film "Die Tote vom Deich" (2006), directed by Matti Geschonneck, featured him as a dangerous murderer on the run. On the big screen he starred in "Weisse Lilien" ("Silent Resident", AT/DE/LU/HU 2007) as a high-rank member of a futuristic and totalitarian housing complex. From 2008 to 2015, Martin Wuttke joined Simone Thomalla to star as an investigator team for the Leipzig edition of "Tatort".

In 2009, Martin Wuttke was appointed to the ensemble of the Wiener Burgtheater. It was only until a year later that he was awarded the Nestroy-Theaterpreis for his portrayal of Christian in "Das Begräbnis".

2009 held another important role in store for him: in Quentin Tarantino's "Inglourious Basterds" (DE/US) he played Adolf Hitler which he personified as a subtle caricature, much in line with the general sentiment of the film. It is probably because of this role that over the following years he featured frequently in international co-productions: in the fairytale-like spy thriller "Wer ist Hanna?" ("Hanna", US/GB/DE 2011) as a reclusive contact person; in Tom Tykwer's science fiction film "Cloud Atlas" (US/DE 2012) in three different roles as Mr. Boerhaave, as a guard and as "Leary the Healer"; in the spy drama "A Most Wanted Man" (DE/GB 2014) as a sinister figure called "the Admiral"; and in four episodes of the US series "Homeland" (2015) as a German secret service agent.

Wuttke then featured in a pivotal role in "George" (2013, TV) a biopic about Heinrich George, in which he again played Joseph Goebbels. At the Berlin IFF 2014, the award-winning drama "Fieber" ("Fever", AT/LU 2014; released in summer 2016) premiered. "Fieber" stars Wuttke as a father who hides dark secrets from his time as a foreign legionary from his daughter. A lot smaller, but nonetheless important was his role as an employee of Amnesty International in Florian Gallenberger's thriller "Colonia Dignidad – Es gibt kein Zurück" ("Colonia", DE/LU/FR 2015). In 2015, he also received the Nestroy-Theaterpreis for playing the title role in "John Gabriel Borkman" at the Wiener Akademietheater. Currently, he is shooting the TV film "Gladbeck", a filmic reworking of the infamous hostage drama of 1988 which is to air in 2017.