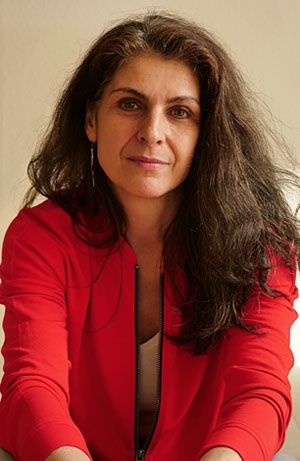 Laila Stieler was born in 1965 in Neustadt an der Orla (GDR at the time). After graduating from high school, she worked with VEB Elektrokohle Lichtenberg in 1984/85, where she also worked in the editorial department of the company newspaper. From 1985 to 1986, she completed a traineeship at GDR television, followed by studies in film and television dramaturgy at the GDR Academy of Film and Television in Potsdam-Babelsberg (1986-1990). While still a student, she was a dramaturge on several student short films, including the documentary "Was jeder muß ..." (1988) and the feature film "Zug in die Ferne" (1990), both directed by Andreas Dresen. "Zug in die Ferne" received several awards: the Filmdukaten and Volkshochschulpreis Mannheim, the Hessian Film Prize and the prize of the signatories of the Oberhausen Manifesto. In collaboration with Andreas Dresen, she also wrote the screenplay for the latter's award-winning feature film debut "Stilles Land" (1992). Further collaborations of the two followed.

After graduating, Stieler worked as a dramaturge for GDR television (1990-91), followed by a position in the television drama department of broadcaster MDR (1992). From there she moved to UFA television production in 1993, where she worked as a producer until 2002. In this capacity, she was responsible for script development, casting and production supervision on numerous productions. These included the award-winning TV movies "Ich klage an" (1993, directed by Frank Guthke), "Zu treuen Händen" (1995, directed by Konrad Sabrautzky), "Der Ausbruch" (1997, directed by Mark Schlichter) and "Die Mörderin" (1999, directed by Christian von Castelberg). In addition, Stieler wrote screenplays for several TV productions, such as Andreas Dresen's "Mein unbekannter Ehemann" (1994) and Dagmar Hirtz's "Die Schwiegermutter" (2000).

For the screenplay of Andreas Dresen's "Die Polizistin" ("Policewoman", 2000), Stieler and her co-writer Dresen received the Television Film Award of the German Academy of Performing Arts and a Grimme Award in Gold. For Dresen, she also wrote the screenplays for "Willenbrock" (2005) and "Wolke Neun" ("Cloud 9", 2008, together with Dresen, Jörg Hauschild and Cooky Ziesche). She wrote further screenplays for Maria Schrader's love and family drama "Liebesleben" ("Love Life", DE/IL 2007) and Doris Dörrie's successful neighborhood comedy "Die Friseuse" ("The Hairdresser", 2010). The drafts for Tim Trageser's school shooting drama "Die Lehrerin" (2011, TV) and Urs Egger's burnout drama "Brief an mein Leben" (2015, TV) earned her (along with the directors) nominations for the prestigious Grimme Award. The docu-drama "Die Opfer - Vergesst mich nicht" (2016), the second part of a trilogy about the murders of the German terror group "National-socialist Underground", directed by Züli Aladağ, received a lot of positive attention but also some criticism.

After that, lighter fare was the screenplay for Buket Alakuş' culture-clash comedy "Eine Braut kommt selten allein" (2017, TV). Again for Andreas Dresen, Laila Stieler wrote the screenplay for "Gundermann" (2018), about the eventful life of real-life GDR singer-songwriter Gerhard Gundermann (1955-1998). She was awarded the German Film Prize in 2019 for this screenplay.

Also her next project was a collaboration with Dresen: She wrote the screenplay for his drama "Rabiye Kurnaz vs. George W. Bush," based on true events, about Rabiye Kurnaz, whose son Murat was imprisoned as an alleged terrorist in the U.S. prison camp Guantanamo. The film premiered in February 2022 in competition at the Berlinale, where Stieler received a Silver Bear for Best Screenplay. Her next screenplay, "In Liebe, eure Hilde," was also filmed by Andreas Dresen.