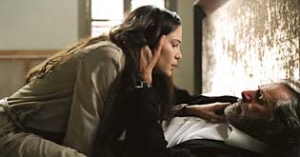 When Jara meets Arie, her father′s boyhood friend, she is immediately drawn to his unflinching and assured presence. It is not long before she forsakes her well-meaning husband for the powerful, mysterious older man, who seems to represent something totally new and exciting in her life. In short: will, strength and the key to her family′s mysterious past. They fall into a heated affair that soon drifts towards the destructive as Jara realizes the things in Arie that attract and repel her with equal intensity at the same time. The story does not only deal with getting her feelings and love under control, in addition it describes the way of finding her own personality in consideration of her difficult family background.

The novel Lovelife is cerebral, seductive, provocative, and profound and was 25 weeks in the European Top 10 list of bestselling books. Lovelife has been declared "a true literary celebration... one of the most inspired novels ever written in Israeli literature" (Tel-Aviv).