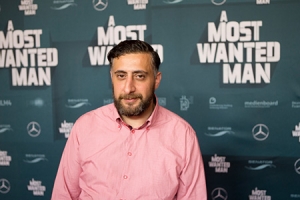 Kida Khodr Ramadan at the premiere of "A Most Wanted Man" in Berlin on September 4, 2014

Kida Khodr Ramadan was born in Beirut on October 8 1976. After his family fled the civil war in Lebanon, he grew up in the Kreuzberg district of Berlin. Already as a teen, Ramadan wanted to be a performer, and he became part of the local breakdance and hip hop scene. In 2002, former social worker and filmmaker Neco Çelik discovered him as an actor for the drama "Alltag". This was followed by supporting roles in "Yugotrip" (2004) and the comedy "Kebab Connection" (2005).

In 2006, Ramadan made a memorable turn as a Berlin gang member in Detlev Buck's "Knallhart" ("Tough Enough"), and also had a recurring role as a police detective in the TV series "Der Kriminalist". He then starred opposite Ingo Naujoks and Thomas Sarbacher in the award-winning tragicomedy "Underdogs" (2007), and was one of the leads in Hendrik Handloegten's "Tatort" episode "Der tote Chinese" (2008).

In addition to being a prolific, much-in-demand TV actor, Ramadan also continued to appear in theatrical releases. His performance in "Ummah – Unter Freunden" (2013) garnered him a nomination for Best Supporting Actor at the 2014 German Film Awards.

His leading performance as a Lebanese gangster boss in the miniseries "4 Blocks" (2017) garnered Ramadan a nomination for the 2018 German Television Award. The same year, he starred opposite Edin Hasanovic and Moritz Bleibtreu in the gangster drama "Nur Gott kann mich richten" ("Only God Can Judge Me").

Ramadan continued being a prominent face on TV as well as on the big screen with appearances in the Danish-Swedish thriller series "Greyzone" (2018, as terrorist) and the German series "Blockbustaz - Willkommen in der Hood" to name but a few. On the big screen, he played supporting roles in the comedy film "Verpiss Dich, Schneewittchen" (2018, as the brother of the main character portrayed by Bülent Ceylan) and in the thriller "Spielmacher" (2018, as a Russian gangster). He starred in a lead role in Detlev Buck's "Asphaltgorillas" ("Asphalt Gorillas", 2018) as a gangster in Berlin who runs into difficulties with one of his sidekicks.