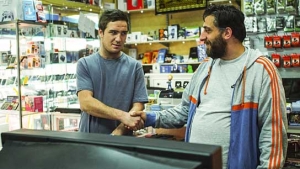 During his mission to infiltrate a right-wing organisation, undercover agent Daniel (Frederick Lau) shoots two skinheads. The incident is covered up, but Daniel is haunted by his conscience. He wants to quit the Federal Office for the Protection of the Constitution, but his superiors won't let him go. Instead, they suggest that he lays low in Berlin-Neukölln for a couple of months. At first, Daniel doesn't feel comfortable in the new surroundings, but then he starts do re-decorate the run-down apartment. When he purchases a TV set from Arabian salesman Abbas (Kida Khodr Ramadan), it marks the beginning of a new friendship. From Abbas, Daniel learns more about local Muslim culture and the everyday conflicts and prejudices it faces in Germany. Just when Daniel feels at home in Neukölln and enjoys the company and trust of Abbas, the agency re-enters his life: In need of a successful investigation, they want Daniel to pin something on Abbas. Daniel refuses, and decides to fight for his new community.