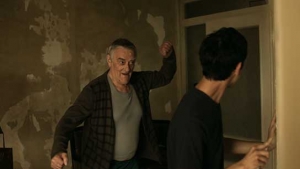 Kaddish for a Friend

Growing up in a Palestinian refugee camp, the 14-year-old Ali Messalam learned to hate Jews at an early age. After escaping Lebanon, he and his family end up in Berlin-Kreuzberg. Here, he tries to fit in and longs for nothing more than to be accepted by his fellow Arab youths. But to gain this recognition, he has to prove himself. In a test of courage, he breaks into the apartment of his Russian neighbor
Alexander Zamskoy, an 84-year-old Jewish WWII veteran. But Ali’s “friends” follow him into the apartment and vandalize the old man’s home with abandon. Alexander only recognizes Ali when he returns home earlier than expected and reports him to the police. To avoid being sentenced and deported, Ali is forced to seek out closeness to his enemy…
"Kaddish for a friend" is a tragicomic story about friendship, trust and the art of forgiveness.