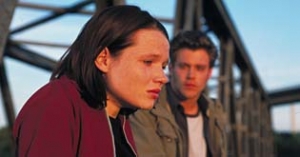 For Hayat, a 20-year-old girl of Turkish-German background, football is the most important thing in her life. She’s the best and most spirited player on her football team. But all of a sudden she’s got other things to think about. The doctors diagnose breast cancer. The operation changes her life, but she’s a fighter and soon wants to pick up where she left off.

Hayat grew up with her father Baba Can – her mother died of cancer when Hayat was still a small child. No wonder that Baba Can is worried about his daughter. He forbids her to overdo and most of all to play football, and cancels her membership in the team. But he hasn’t reckoned with the tenacity of his daughter. Behind his back she joins up with ragtag bunch of social misfits who make up the Hamburg woman’s football team FC Schanze.

Soon the girls are swept along by her courage and enthusiasm. Not only the team, but above all the trainer Toni is impressed by her. But he can’t seem to understand why his attempts to flirt with her are nipped in the bud. Hayat is no less attracted to him, but for obvious reasons, she feels completely insecure. Should she confide her secret to him? How will he react when she tells him about the operation?

"Offside", the director explains, is "not a story about an illness, but rather deals with finding a way back into life. In this extreme situation football becomes literally a game of life or death for my protagonist, because sports help her to accept her body anew."