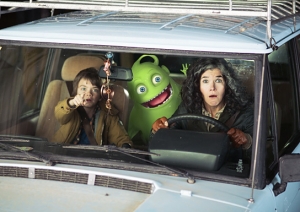 Life isn't easy for little Milo: His older sister Lola is constantly picking on him, and his peers think of him as a hopeless coward. One day, he makes an unexpected acquaintance in the basement: Hugo, a bona fide ghost, whose slimy appearance at first scares Milo, yet soon turns out to be a harmless and friendly being. Hugo has troubles of his own, for an evil spirit has expelled him from his castle. If he does not return there, he will eventually disappear. Aided by gruff ghost hunter Hedwig, Milo and Hugo set out to battle the malevolent specter.