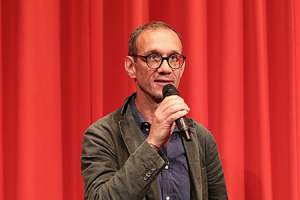 Cinematographer Frank Griebe, born August 28, 1964, in Hamburg, is mainly known for his long-time collaboration with director Tom Tykwer. Griebe is director of photography for all of Tykwer's eight films (including three short films) and won the German film prize for "Lola rennt" ("Run Lola Run") and "Winterschläfer" ("Wintersleepers") together with "Zugvögel ... Einmal nach Inari" ("Trains 'n' Roses"). Griebe"s career in the film business started with an instruction to make film copies. From 1984 to 1986, he trained to become a certified camera assistant. After several years as a camera assistant for cinematographers like Michael Teutsch or Jürgen Jürges, Griebe became a cinematographer in his own right in 1991.

This year also marked the beginning of his collaboration with Tom Tykwer. Griebe won the Kodak prize and the German camera prize for "Die tödliche Maria" ("Deadly Maria"), his very first work as a director of photography. He is not only a technically experienced cinematographer but also likes to experiment and is stylistically versatile. Thus, he not only created the ultra-modern, experimental video clip style of "Lola rennt" ("Run Lola Run"), as well as the extremely calm and laconic images of "Zugvögel… Einmal nach Inari" ("Trains 'n' Roses") and the rather naturalistic style of "Absolute Giganten" ("Gigantic"). This broad stylistic spectrum has always enabled Griebe to transfer the abstract theme of a film to the visual level and was one of the main reasons Frank Griebe won the Marburg camera prize for his work as a cinematographer in 2002.

Since then, Griebe's extraordinary productivity and the expansion of his stylistic range have proven that his work is not done yet: For instance, Griebe gave Franke Potente's directing debut "Der die Tollkirsche ausgräbt" ("Digging for Belladonna") the look of a silent film. In the same year, Griebe was responsible for the elaborate and at the same time realistic art work for the box office hit "Das Parfum" ("Perfume – The Story of a Murderer"), directed by Tom Tykwer – and won the German film award for this accomplishment.

In addition to his continuing creative collaboration with Tykwer – on the thriller "The International" (2009), the segment "Feierlich reist" which was part of the omnibus film "Deutschland '09" (2009) and the romance "Drei" ("Three", 2010) – Griebe served as DoP on several non-fiction films: He shot Sönke Wortmann's "Deutschland. Ein Sommermärchen" (2006), contributed to the TV project "24 h Berlin – Ein Tag im Leben" (2009), and worked with directors Romuald Karmakar (on the shorts "Ramses" and "Ein Mann unseres Vertrauens) and Julian Benedikt ("Longing for Beauty – Sehnsucht nach Schönheit", 2010). He also worked with director Annekatrin Hendel on "Anderson" (2013), a documentary about the life of East German author – and, as was revealed, secret police informer – Sascha Anderson.