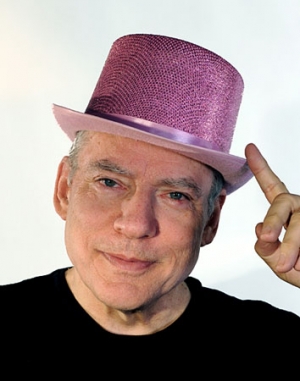 Rosa von Praunheim, born November 25, 1942, in Riga, during the German occupation under his real name Holger Radtke, grew up with his adoptive parents in East Berlin under the name Holger Bernhard Bruno Mischwitzky. After the escape to West Germany in 1953, the family lived at first in the Rhineland and eventually settled in Frankfurt am Main. In Frankfurt, von Praunheim attended a classical language high school but left already after finishing secondary school level. He started to study painting at Offenbach's Werkkunstschule (today: Hochschule für Gestaltung – HfG). One year later, he transferred to Berlin's Hochschule für Bildende Künste but did not graduate any of his studies. At this time, during the 1960s, he assumed his stage name Rosa von Praunheim, as reminiscence to his Frankfurt quarter Praunheim and to the "Rosa Winkel" (pink triangle) – the symbol, homosexuals had to wear in the concentration camps during the Third Reich.

In 1967, Rosa von Praunheim made his movie debut with the short film "Von Rosa von Praunheim". He sold the film to Hessischer Rundfunk and by doing so was able to fund further movie projects. Until the end of the 1960s, he finished short and experimental films like "Grotesk – Burlesk, Pittoresk" (1968), "Schwestern der Revolution" (1969), and "Samuel Beckett" (1969). His feature film debut, the relationship story "Die Bettwurst" (1970) that was filmed with lay actors and nearly no budget at all immediately became a cult film. In the same year, Praunheim caused a stir that went far beyond the gay scene with his documentary film "Nicht der Homosexuelle ist pervers, sondern die Situation in der er lebt" ("It Is Not the Homosexual Who Is Perverse, But the Society in Which He Lives") – virtually overnight, von Praunheim turned into an icon of the German gay movement that experienced a downright boom through the film.

During the following years, Rosa von Praunheim's feature and documentary films were mainly influenced by three thematic domains: the life stories of vital older women, for instance, in "Unsere Leichen leben noch" ("Our Corpses Still Live", 1981), homosexuality and AIDS in "Ein Virus kennt keine Moral" ("A Virus Knows No Morals"), 1985, and the city of New York in "Überleben in New York" ("Survival in New York"), 1989. In 1991, he caused a scandal with his "outing" campaign: In a move that attracted high media attention, von Praunheim revealed several German celebrities who had kept their homosexuality a secret. With this morally dubious campaign, von Praunheim, on his own admission, wanted to call attention to the neglected problem of AIDS and to double standards in society. Besides bizarre, postmodern-seeming feature films like "Der Einstein des Sex" ("The Einstein of Sex", 1999), von Praunheim mainly turned to (semi-)documentary projects from the early 1990s on. Different aspects of homosexual life are still his main topics, from "Ich bin meine eigene Frau" ("I Am My Own Woman", 1992) to the history of the German cross dresser movement in the 20th century, from "Männer, Helden, schwule Nazis" (2005) to homosexual right wing extremists and to "Tote Schwule – lebende Lesben" ("Dead Gay Men and Living Lesbians", 2008) about homosexuals from different generations.

Von Praunheim did not learn until the year 2000 that he grew up with adoptive parents. After his foster-mother died in 2003, he went on an intensive search for traces of his own roots that he documented in his overly personal film "Meine Mütter – Spurensuche in Riga" ("Two Mothers - The Search Began in Riga", 200

During the following years, Praunheim completed several more documentaries, most of which dealt with aspects of homosexuality, among them "Rosas Höllenfahrt" (2009), a depiction of hell from a gay perspective, and "Die Jungs vom Bahnhof Zoo" ("Rent Boys", 2011), the unbiased and cliché-free portrait of five young gay prostitutes in Berlin. Like many of his films, the production "König des Comics" ("King of Comics") premiered in the Panorama section of the Berlin IFF. The documentary deals with the life and work of renowned gay comic artist Ralf König.

In order to honor von Praunheim's 70th birthday, TV station RBB in cooperation with Arte screened a 700 minute short film compilation titled "Rosas Welt" on the night of November 24, 2012. Never before in German TV history, a documentary film maker had been given this much transmission time in one stretch. The film series consists of mostly 20 minute long portraits of people from the industry like Eva Mattes and Werner Schroeter but also of non-celebrities and families.

In the years that followed, Rosa von Praunheim remained a filmmaker who never settles: At the Lichter Filmtage 2014 festival in Frankfurt, his documentary "Praunheim Memoires" premiered in which the director traces important stages of his personal life. In "Auf der Suche nach Heilern" that premiered at DOK.fest München 2014, he documents his experience with miracle healers of all sorts. In December 2014, "Laura – Das Juwel von Stuttgart" was released in selected theaters. The documentary portrays the female owner of one of Germany's oldest gay clubs who is a passionate fighter against social injustice.

In the Panorama program of the Berlin IFF 2015, Rosa von Praunheim presented "Härte", a feature film that by combining interviews and reenactments tells the story of former karate champion and ex-pimp Andreas Marquardt who was mistreated as a child by his father and sexually abused by his mother. The film was released in German movie theaters in April 2015. Also in 2015, Rosa von Praunheim received the Federal Order of Merit.

At the 2015 Hofer Filmtage, he presented his short documentary "Flüchtlinge, zu viel?", in which two individuals from families with migrant roots discuss their different takes on the current refugee situation. Praunheim next made the documentary "Welcome All Sexes: 30 Jahre Teddy Awards" (2016), which chronicles the history of the gay-lesbian film award and screened at the 2016 Berlin IFF.

"Act! – Wer bin ich?", Praunheim's documentary on an educational drama project in Berlin, premiered in April 2017 at the Achtung Berlin Festival and went on to win the New Berlin Film Award. The film was released theatrically in June 2017, just as Praunheim presented his next feature, the documentary, "Überleben in Neukölln" (2017), at the Munich Film Festival.

Also in 2017, Federal President Frank-Walter Steinmeier congratulated Rosa von Praunheim on his 75th birthday in the form of a public acknowledgement. In the same year his autobiographical textbook "Wie wird man reich und berühmt?" (translates to "How to become rich and famous") was published.

"Männerfreundschaften" (2018), a documentary with fictional scenes about the sexuality of Johann Wolfgang von Goethe, was awarded Best Feature Film at the Lichter Filmfest Frankfurt. In 2019 von Praunheim received a lifetime achievement award at the important gay and lesbian Pink Apple Film Festival in Zurich. In January 2020 the Max Ophüls Film Festival also granted him an honorary award. Shortly afterwards his next feature film was released in German cinemas: "Darkroom" (2019), based on the real case of a male nurse who flirted with other men in gay clubs in order to kill them with an overdose of knockout drops and rob them.

Besides his work as a filmmaker, Rosa von Praunheim has also worked as a fiction and non-fiction writer and a poet since the 1960s. Until 2006, he taught film directing at Potsdam's Hochschule für Fernsehen und Film.