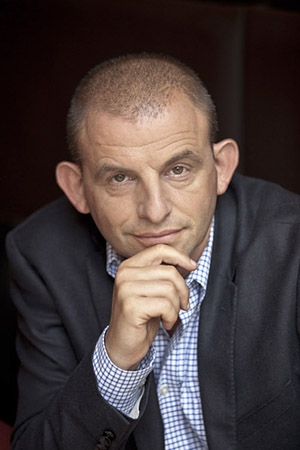 Dominique Horwitz was born in Paris on 23 April 1957 to parents of German origin. He initially spent his childhood and youth in France until he moved to Berlin with his family in 1971. There he attended French grammar school and graduated with Abitur.

He first appeared in front of the camera in 1976 for the television film "Eine Jugendliebe" after his school friend Christian Berkel recommended him for the role. This was followed in 1978 by a role in the Tv film "Himmelfahrt" from the "Tatort" crime series and his screen debut in Peter Lilienthal's "David". During this time Horwitz also began his theatre career at "CaDeWe" (Cabaret des Westens) in Berlin. Numerous engagements subsequently took him to theatres and playhouses all over Germany. From 1979 to 1983 he was a member of the ensemble of the Zimmertheater Tübingen. After that he got roles at the Bayerisches Staatsschauspiel in Munich as well as at the Thalia Theatre in Hamburg. Among other roles, he impersonated the Devil in "The Black Rider" directed by Robert Wilson and Danton in Georg Büchner's "Dantons Tod".

In addition to numerous stage roles, he continued to appear in front of the camera for film and television. After roles in films such as "Stammheim", "Martha Jellneck" or "Fifty-Fifty", Horwitz became known to a large cinema audience as Obergefreiter Fritz Reiser in Joseph Vilsmaier's successful war film "Stalingrad" (1992). In Dieter Wedel's four-part television film "Der große Bellheim" (1992) he played an important supporting role as a salesman who steals from the department stores' chain in which he himself works by committing numerous frauds.

Other roles on TV and in feature films followed, among them the crime thriller "Trickser" (1997) by Oliver Hirschbiegel, in which Horwitz played a bank robber who fights with his accomplice over the stolen money. For this role, he received the television award "Goldener Löwe" as Best Actor in 1998. Another success was Andreas Dresen's ensemble film "Nachtgestalten" ("Night Shapes", 1999). In it, Horwitz played the homeless Victor, who wanders through Berlin with his girlfriend and, by a lucky coincidence, is able to escape life on the streets for one night. The film received the award for Best Feature Film at the German Film Awards, Dominique Horwitz was nominated for Best Actor in a Supporting Role.

Only a short time later, he appeared in the TV film "Enthüllung einer Ehe" (2000) by Michael Verhoeven in which he played a father who has his coming out as transgender. Horwitz was awarded the FIPA International Television Award for Best Male Actor Performance for the film in 2000. Other incisive film roles followed, such as in Michael Klier's drama "Heidi M." alongside Katrin Sass. In the multiple award-winning film "Die Blindgänger" ("The Blind Flyers", 2004), he played a boarding school counselor; he was the Danish Inspector Poulsen in "Die blaue Grenze" ("A Quiet Love", 2005). In the British-German co-production "Shooting Dogs," which describes the first days of the genocide in Rwanda, he played a blue-helmet commander condemned to inaction. Volker Schlöndorff cast Horwitz in his historical drama "Strajk - Die Heldin von Danzig" ("Strike", 2006) as a trumpet player in a shipyard band with whom the title character falls in love. He used his talent for portraying grotesque characters as the evil sports teacher Daume in "Sams in Gefahr" ("My Magical Friend Sams", 2003, directed by Ben Verbong) as well as the mayor in Peter Kahane's "Die rote Zora" ("Red Zora") which was released in January 2008.

Horowitz made a name for himself as a singer with his Brecht-Weill homage "The Best of Dreigroschenoper" (world premiere 1993) and his convincing interpretation of Jaques Brel, with whose chansons he has toured several times since 1997. In addition to this, in 2012 he made his opera directing debut at the Erfurt Theater with "Der Freischütz" by Carl Maria von Weber.

Dominique Horwitz has also appeared as an author: In 2015, his first crime novel "Tod in Weimar" was published.