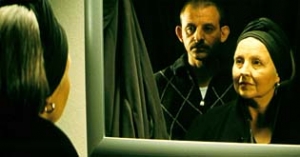 Schleswig-Holstein. Surrounded by the sea. The broad landscape is liberating, but at the same time, also constricting. Twenty-year-old Momme Bief’s father has just died, so Momme has to travel to the Danish border to tell his grandfather. Since Momme hasn’t come to terms with the death himself, he is soon entangled in a web of lies. Then his father’s ghost appears in several dreams, wanting to put the past to rights, just as Momme has met the love of his life. And the sea separates the two lovers.

But Grandad still hasn’t gotten over the death of his wife and now his son is gone too. Confused and alone, he takes off for Denmark and sets up a tent on the beach. It’s not until he meets a young girl that he rediscovers life is for the living. He then sets off to bid his final farewell to the dead.

And then there’s the half-Danish police officer, Poulsen. When full-Danish police officers arrive in town, on royal business no less, he is chomping at the bit to be assigned to the case. But when it goes to his subordinate, he decides to do some private detective work ... and meets the love of his life. If only it wasn’t for a certain dark secret...