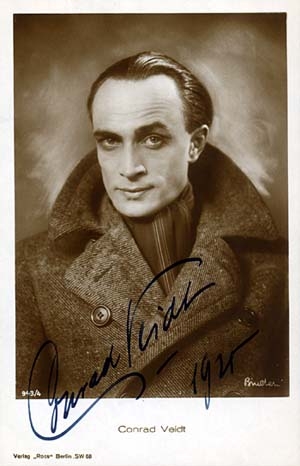 Hans Walter Conrad Veidt, born on January 22nd, 1893 in Berlin, dropped out of secondary school in 1912 due to insufficient results. Only one year later he turned into a new educational road when he enrolled at Max Reinhardt's theatrical school at the German Theatre, which was groundbreaking for his career. In the very same year he completed his stage debut followed by smaller theatrical parts. Before Veidt could finish the drama training, he was drafted for military service in the First World War and sent to the eastern front in 1915. In 1916 he was released from military service because he was suffering from jaundice. In the following months he acted in different front theatres and returned to Berlin in September 1916, where he was offered an acting job at the German Theatre. From 1919 to 1921 he acted at the Barnofsky-Stages, and in the play time 1922/23 at the Renaissance Theatre.

Parallel to his theatrical work, Veidt started a film career after his return from the First World War. His debut in front of the camera was a role as a countess' lover in the drama "Der Weg des Todes" ("The Road of Death", 1916/17). Due to his striking outward appearance – tall-growing, gaunt figure, narrow cheeks, expressive forehead, distinctive mouth and big eyes with a piercing gaze – he often played mysterious and demonic looking roles, like an Indian Priest in Robert Wiene's "Furcht" ("Fear", 1917) or Satan in "Der nicht vom Weibe Geborne" (1918; directed by Franz Eckstein, Rosa Porten).

In 1917 Veidt started a long lasting cooperation with the director Richard Oswald. Until 1937 he participated in more than 20 of his films as a main actor. Oswald's moral and educational films ("Sitten- and Aufklärungsfilme") such as "Das Tagebuch einer Verlorenen" ("The Diary of a Lost Girl", 1918), "Anders als die Andern" ("Different from the Others", 1919), "Der Reigen" (1920) and "Lady Hamilton" (1921) made Veidt one of the most popular and besides Emil Jannings one of the best paid stars of the German film scene. He frequently played social misfits, elegant negative figures or broken heroes such as a homosexual violinist, who commits suicide after being blackmailed in "Anders als die Andern".

Thanks to his bizarre body language Veidt established himself as an ideal and seminal expressionistic actor. At the same time the film parts under Oswald improved and cemented Veidt's image as a specialist for playing demonical or driven characters.

F.W. Murnau for instance cast him for a part in his "Dr. Jekyll and Mr. Hyde"-adaption "Der Januskopf" (1920). Robert Wiene assigned Veidt the role of the mesmerized medium and murderer Cesare in his masterpiece "Das Cabinet des Dr. Caligari" ("The Cabinet of Dr. Caligari", 1920), which is one of his most defining film appearances up to the present day. Four years later Veidt played the main character in Wiene's "Orlacs Hände" ("The Hands of Orlac", 1924), a genius pianist who has the hands of an executed murderer transplanted for his own after an accident.

In 1919/20 Veidt produced "Wahnsinn" ("Madness") and "Die Nacht auf Goldenhall" ("The Night of Goldenhall") and cast himself as the chief character.

Further important parts during these years were among others the Maharadscha in "Das indische Grabmal" ("Mysteries of India", 1921; directed by Joe May), Iwan the Terrible in "Das Wachsfigurenkabinett" ("Waxworks", 1924, directed by Paul Leni) and the title role in "Der Student von Prag" ("The Student of Prague", 1926, directed by Henrik Galeen). Veidt, or as Hans-Micheel Bock called him "the Daemon of the German silent film", only occasionally played friendly characters such as the loving father in Paul Czinner's "Der Geiger von Florenz" ("Impetuous Youth", 1926).

Thanks to placement of the actor John Barrymore, Veidt shot four films in Hollywood between 1927 and 1929. Because of his expressive style he did not have a lasting success in the American cinema of the upcoming sound film. In the German sound film however, he was successful, for example in Eric Charell's classic "Der Kongress tanzt" (1931), Gerhard Lamprecht's adventure film "Der schwarze Husar" ("The black Hussar", 1932) and Karl Hartl's science-fiction film "F.P. 1 antwortet nicht" ("F.P. 1 Doesn't Answer", 1933). His last role in Germany was Herman Gessler in the biographical film "Wilhelm Tell" in 1933 (Germany/Switzerland, directed by Heinz Paul).

After the "Machtübernahme" (seizure of power) of the Nazis in 1933 Veidt and his Jewish wife moved to Great Britain. There he played the main character in the screen adaption of Lion Feuchtwanger's "Jew Süss" (directed by Lothar Mendes), which in comparison to the Nazi propaganda film "Jud Süß" (1940) does not draw a racist distorted picture of Joseph Süß Oppenheimer. Actually the opposite was the case: In Germany, the film and especially Conrad Veidt were accused of heresy due to "pro-Semitic tendencies". In England Veidt, who became a British state resident in 1938, often acted in spy movies such as "Dark Journey" (UK 1937; directed by Victor Saville), "The Spy in Black" (UK 1939; directed by Michael Powell), and "Contraband" (UK 1940, directed by Michael Powell), in which his German accent did not cause a dramaturgical inconsistency. In addition, he also participated in adventure films, for example the award-winning blockbuster "The Thief of Baghdad" (UK 1940), which was also Veidt's only colour film.

In 1940 he went to Hollywood once more, where he was privately as well as in his roles actively engaged against fascism. Thus, he played in Jules Dassin's "Nazi Agent" (1942) the dual role of twin brothers, who are separated after birth - one of them is raised as a patriotic American, whereas the other one becomes a high-ranking Nazi. Supposedly his most popular role in the United States is the Nazi-major Heinrich Strasser in Michel Cutiz' cult film "Casablanca" (1942), although his scenes were cut out of the German version in the 1950's and not refitted until the 1970's. Veidt played his last role in 1949 in the spy movie "Above Suspicion" alongside Joan Crawford and Fred MacMurray.

On April 3rd, 1943 Conrad Veidt died of a heart attack on a golf links in Hollywood.