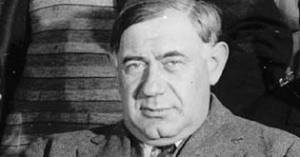 Henrik Galeen was born as Heinrich Wiesenberg on January 7, 1881, in Stryi, Ukraine (then Austria-Hungary). He initially started a career as a journalist and occasional actor before he was employed at Deutsches Theater Berlin in 1906 as an assistant of Max Reinhardt – although there is no definite historical proof for either the early course of his career or for his birthplace. Some sources indicate Berlin as his birthplace and the theatre season 1909/10 as his first season at Deutsches Theater.

In 1911, he went to Volksbühne Berlin where he worked as a director. In 1914, he again changed his workplace and went to Deutsches Künstler-Theater in Berlin. In the same year, Galeen made his debut on the movie screen as the director of "Der Golem" ("The Golem"). His debut film, the film version of an old Jewish legend about a clay statue that is brought back to life, was praised by contemporary critics as a "wonderful, magnificent feature film" (Lichtbild-Bühne). Galeen had also written the screenplay together with Paul Wegener and played a supporting role alongside Wegener in this film that is considered lost today.

In 1920, Galeen was allegedly involved as a co-writer in Wegener"s third adaptation of the Golem myth, "Der Golem, wie er in die Welt kam" ("The Golem") but although he is credited in official sources there is no definite proof for his involvement.

After World War I, Galeen was employed by the Ufa group and other production companies as a dramaturg, director, and writer. He was involved in films like "Die beiden Gatten der Frau Ruth" (1919), starring Henny Porten in the leading role, "Judith Trachtenberg" (1920), and "Der verbotene Weg" (1920), that credited Galeen as the writer and director. The same counts for "Die Geliebte Rosowolsky" that was finished one year later.

But Galeen"s involvement in "Nosferatu" (1921), directed by Friedrich Wilhelm Murnau, marked the highlight of his professional career during that era: Galeen wrote the screenplay to this early masterpiece of the horror film genre based on Bram Stoker"s novel "Dracula" – although the novel was not published in a German translation until the following year.

In 1923/24, Galeen wrote the screenplay to Paul Leni"s "Wachsfigurenkabinett" ("Waxworks"), another film that is considered to be one of the classic films of Weimar cinema in the meantime. However, the sophisticated and star-studded production received mixed reviews by contemporary film critics.

During the following years, Galeen worked in different positions for numerous films that are rather unknown today. But in 1926, he directed a remake of Stellan Rye"s film "Der Student von Prag" ("The Student of Prague") from 1913. In Rye"s version, Paul Wegener played the leading role while in Galeen’s version, Conrad Veidt played the student Balduin who sells his mirror image to the diabolical Scapinelli, played by Werner Krauß. Galeen"s fascination for the realm of the magical and the fantastic, a recurrent theme in his work, also influenced his film "Alraune" ("Unholy Love") that was finished one year later.

In the late 1920s, Galeen worked for several years as a director and supervisor in England where he finished "After the Verdict" (1928), a silent film starring Olga Tschechowa in the leading role" as well as his first sound films. In 1931, he returned to Germany and worked as a screenplay writer for Harry Piel for whom he had already written several screenplays before. The spy film "Salon Dora Green" ("The House of Dora Green", 1932/33) was Galeen"s last film as a director. In 1933, he left Germany and probably emigrated to England. He finally went to the USA in 1940.

During his last years, Galeen led a very reclusive life in Randolph, Vermont. On July 30, 1949, Henrik Galeen died of cancer.