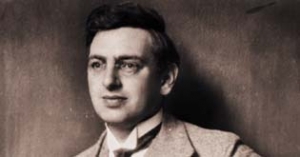 Richard Oswald was born November 5, 1880 in Vienna. Son to a wealthy businessman, he pursued a career in the theatre, and from 1907 on, he was writing and directing plays in Vienna. After falling victim to Anti-Semitic attacks, he moved to Düsseldorf and worked as an stage actor. In 1911, he appeared in two films of Reinhard Bruck and subsequently established himself as a successful writer for the new medium with the crime caper "Der Hund von Baskerville".

In the wake of WWI, Oswald debuted as a director and his feature "Das eiserne Kreuz" marked the first of many encounters with state censorship. He was hired as a director and author by the Greenbaum-Film GmbH, where he continued his popular "Baskerville"-series. He created the character of German detective Engelbert Fox and directed "Hoffmans Erzählungen", which saw the screen debut of Werner Krauß.

In 1916, Oswald founded the Richard Oswald-Film-Gesellschaft, which produced and released literature adaptations and detective stories under the label "Das unheimliche Haus" (The Haunted House). Based on an idea by Lupu Pick, the feature "Es werde Licht!" became the first of Oswald's "Aufklärungsfilme" – films that explicitly deal with sex-oriented themes and intermingle genre entertainment with public education and socially and politically progressive agenda –, which would become his most successful as well as controversial asset over the next years. These films, which were frequently cast with daring actors like Anita Berber, Conrad Veidt, Werner Krauß and Reinhold Schünzel, included "Tagebuch einer Verlorenen", "Dida Ibsens Geschichte" and, most importantly, "Anders als die Anderen", the first motion picture ever to address and condemn the public defamation and prosecution of homosexuals.

In 1919, Oswald expanded by opening the Richard-Oswald-Lichtspiele, his own movie theatre in Berlin. Following several flops, his production company had to cope with severe financial problems in the mid-1920s and eventually went bankrupt in 1926. Nevertheless, Oswald remained as busy as ever, producing and directing for other companies like Heinrich Nebenzahl's newly founded Nero Film.

Alternating between popular romps like "Wir sind vom K.uK. Infanterieregiment" and risk-taking dramas like "Feme", which was viciously attacked by the political right, Oswald almost effortlessly made the transition to sound film, his first talkie "Wien, du Stadt der Lieder" proving to be a big success.

Also he remained an expert in delivering entertaining film operettas, comedies and sentimental love stories, his lasting fame as a director in the sound era was again build on three features which expressed his other, far more challenging approach to filmmaking: "Dreyfus", an early court room drama taking on Anti-Semitism and socio-political hypocrisy; "1914-Die letzten Tage vor dem Weltbrand", which re-imagined the the circumstances leading to WWI and caused a censorship scandal, and "Der Hauptmann von Köpenick", a satirical adaptation of Carl Zuckmayer's famous play.

In 1933, the premiere of Oswald's music film "Ein Lied geht um die Welt", featuring Jewish star tenor Joseph Schmidt, was attended by the Nazi-Regime's new Propaganda Minister Joseph Goebbels. Still, among the first films to be banned in Nazi-Germany was Oswald's "Ganovenehre" and consequently, Oswald emigrated and finally arrived in the USA in 1930. Like many artists forced into exile, he had a hard time adapting to the Hollywood Studio System and could therefore never achieve the success he had experienced in Germany. One of the few projects he managed to realize was the con-man comedy "The Loveable Cheat", starring fellow emigrant Curt Bois and cinema legend Buster Keaton in minor parts.

While Richard Oswald dabbled in television, his old sound films were re-released in West-Germany. During his travels through Europe, Richard Oswald died in Düsseldorf on September 11, 1963. His son, Gerd Oswald (1919-1989), established himself successfully as a producer and director in Hollywood.